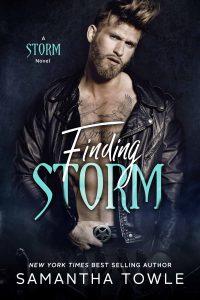 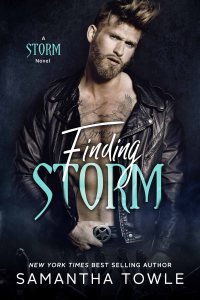 The son of an icon.

He was a legend. Rock royalty.

A man I never met.

But I’m measured against him in every aspect of my life.

The only time I feel like me … the real me … is when I’m onstage with my band. But the more we grow in popularity, the more people compare me to him.

I’m not him. And I never will be. If only everyone could figure that out for themselves.

I need a break from it all.

Then, a confrontation has me jumping in my car, putting LA in my rearview mirror. And a stupid mistake ends up with my car on the side of the road. And straight into the path of a girl who is the exact opposite of everyone else in my life.

And she has no clue who I am.

Even if she did, I don’t think she’d care.

I think she’s intriguing. And hot. Let’s not forget hot.

I’m stuck in this town overnight while my car is being fixed. But I’m thinking I’m gonna stick around a bit longer.

I’m Storm Slater, lead guitarist in Slater Raze and the only child of the late, great Jonny Creed. But, here, right now … I’m nobody. Just a regular guy.

I’m liking it a whole lot.

And I’m liking her even more.

My hands are in her hair. Then, down to her back. Going lower, grasping her thighs as I urge her to wrap her legs around me so I can her even closer. Even though I don’t think I’ll ever get close enough to Stevie. I want to be inside of her in every way that matters. Inside of her the way she’s inside me. She’s under my skin.

To say I was over the moon excited when I heard Samantha Towle was writing another installment in ”The Storm” series is an understatement. Jake and Tru will always have a special place in my heart, and now another couple in the series has won my affections as well. I hope that readers are going to adore Storm and Stevie almost as much as I do!! Their story gave me all the feels! I’ve still got those butterflies as I replay their story in my head!!

Storm Slater is the long-lost son of the late Jonny Creed—guitarist of TMS. He’s the lead guitarist in his band, Slater Raze. Always living in the shadow of his deceased famous father. When the story starts, Storm is everything you’d expect a self-indulgent bad boy rock & roll God to be. I was not finding him to be the least bit appealing, but then he’s dealt a heartbreaking blow when a long-kept secret is revealed. Feeling lost and betrayed, he gets in his car and drives without a destination in mind, just to get away from the people who hurt him the most. His car ends up breaking down in Lake Havasu City, Arizona. It is in this beautiful vacation town that he meets the utterly beguiling and vivacious Stevie Cavalli. Her father owns the local auto repair shop and she co-runs the family B&B with her gran. From the moment she enters the story I was smitten. This twenty-four-year-old girl who has an adorable obsession with 80s music and movies and abhors littering had instantly become one of my top favorite heroines created by Samantha Towle.

Stevie casts an instant spell over Storm. Since she only listens to 80s music, she has no idea who Storm is. She is a breath of fresh air to him. He’s loving the freedom he feels whenever he’s with Stevie. This love bubble that they find themselves in has an impending expiration date. Los Angeles is Storm’s home and he has obligations to his band and record label. Lake Havasu is where Stevie’s family lives and there’s no way she can leave. Will Storm be able to let go of the one woman who has brought him more happiness than he’s ever experienced in his entire life?

”FINDING STORM” is currently available! Samantha Towle fans will not be disappointed! I’m so happy the author has breathed new life into one of my most cherished series!!