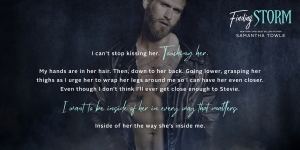 The son of an icon.

He was a legend. Rock royalty.

A man I never met.

But I’m measured against him in every aspect of my life.

The only time I feel like me … the real me … is when I’m onstage with my band. But the more we grow in popularity, the more people compare me to him.

I’m not him. And I never will be. If only everyone could figure that out for themselves.

I need a break from it all.

Then, a confrontation has me jumping in my car, putting LA in my rearview mirror. And a stupid mistake ends up with my car on the side of the road. And straight into the path of a girl who is the exact opposite of everyone else in my life.

And she has no clue who I am.

Even if she did, I don’t think she’d care.

I think she’s intriguing. And hot. Let’s not forget hot.

I’m stuck in this town overnight while my car is being fixed. But I’m thinking I’m gonna stick around a bit longer.

I’m Storm Slater, lead guitarist in Slater Raze and the only child of the late, great Jonny Creed. But, here, right now … I’m nobody. Just a regular guy.

I’m liking it a whole lot.

And I’m liking her even more. 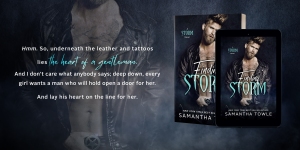 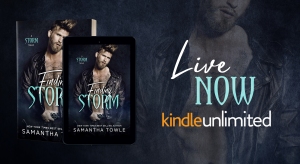 WRAPPED UP IN READING’s REVIEW OF FINDING STORM

“The Monster” by Eminem, featuring Rihanna

“Don’t You (Forget About Me)” by Simple Minds

“I Wanna Dance with Somebody” by Whitney Houston

“I Don’t Care” by Ed Sheeran and Justin Bieber

“God Is a Woman” by Ariana Grande

“Is This Love” by Whitesnake

“Glory of Love” by Peter Cetera

“Love Is a Battlefield” by Pat Benatar

A native of Hull, she lives in East Yorkshire with her husband, their son and daughter, three large furbabies and their small grumpy cat.

She is the author of contemporary romances, The Storm Series, The Revved Series, The Wardrobe Series, The Gods Series, and standalones, Trouble, When I Was Yours, The Ending I Want, Unsuitable, Under Her, River Wild, and Sacking the Quarterback which was written with James Patterson. She has also written paranormal romances, The Bringer and The Alexandra Jones Series. With over a million books sold, her titles have appeared in countless bestseller lists, and are currently translated into ten languages.

Sign up to Samantha’s newsletter for news on upcoming books

Like her author page to keep in the know

Also, Twitter to see the complete nonsense she posts

And lastly Bookbub, just because.