Score one for the Carolina Cold Fury hockey team as a stone-cold badass melts for a woman who makes his blood run hot.

As one of the league’s toughest enforcers, Van Turner is ruthless on the ice. He plays hard because it’s the only way to channel the rage boiling inside, and a reputation as an A-hole is better than everyone knowing the truth. Van has spent his entire life running from a secret that’s kept him from getting involved in relationships—or accepting lucrative deals with East Coast teams. Then the Carolina Cold Fury makes him an offer he can’t refuse . . . and Van meets a woman he can’t resist.

Simone Fournier is the stubborn one in her family—and that’s saying something, considering her brothers are two of the Cold Fury’s biggest stars. Simone gets what she wants, and what she wants is Van. Still, there’s a part of him Simone can’t reach, no matter how hard she tries. In private, he’s all fire and passion. In public, he freezes her out. Van may want to push her away, but Simone won’t let him go that easily. Because this time, she’s playing for keeps.

”Van?” I whisper. ”Am I still shiny?”
”Yes, Simone. So fucking shiny you make everything else in the world seem a little less dull by comparison.” 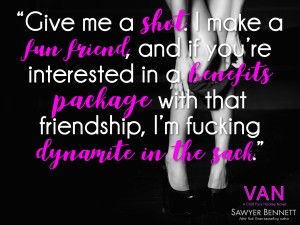 We met Van Turner and Simone Fournier in ”LUCAS”. I was excited to get to their story since I love romances with the older brother’s best friend. I knew that Van and Simone would generate a ton of heat between them since they seemed to rile each other up so easily. Their story ended up being quite different from any of the previous books. This wasn’t my favorite in the series but I must admit it was without a doubt the steamiest!

Simone is currently rooming with her older brother Lucas and his fellow Cold Fury teammate and best friend, Van Turner. She recently dropped out of college and seems just a bit lost. Lucas invites her to live temporarily in the house he shares with Van until she figures out in what direction she wants to take next in life. She is instantly smitten with Van from the moment she meets him and his cold and snarky attitude towards her only fuels her determination to seduce him.

The two play a cat and mouse game for a while. Van tries to pretend that he is not in the least bit attracted to Simone, but he’s no match against her stubbornness. Soon enough they are heating up the sheets and getting down and dirty in just about every room in their house, when Lucas is not around of course, and even in some dark alleyways out in public. These two are insatiable and up for anything to get their rocks off. Their relationship for almost three-quarters of the book seems to be purely carnal and I must admit that I was hoping for a bit more romance which doesn’t really happen till almost nearly the end of the story. 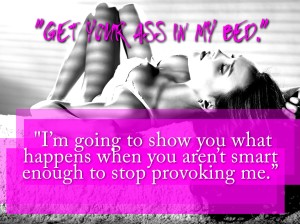 Van has a secret and it’s huge. Something from his distant past still haunts him to this day and it has affected his life deeply. His inability to form close relationships with women and awkwardness in social situations all stem from his painful past. He makes it very clear to Simone that all they can ever have is a sexual relationship and she is more than a willing participant. She made it all too easy for Van and some of her bad life choices made it hard for me to empathize with her.

These two have so much stacked against them, it seems almost impossible that they will end up having a lasting relationship together.

I have to give credit to Sawyer Bennett for coming up with a backstory for Van that I would have never have anticipated and I’m not really sure how I feel about the path she took in that respect. There was also one scene that was so cringeworthy that I wished was not even in the story at all. It made me dislike the heroine even more.

This might not be my favorite in the series but I think most of you may find it very entertaining. It’s sure to get your temperatures rising.