Cole King… the name alone leaves a bad taste in my mouth, a reminder of how he broke my trust in the worst way possible.
My best friend of twenty fucking years.
He had my back and I had his.
Always.
Until he crossed the line.
Now visions of him sinking between my girl’s legs, making her scream in all the ways only I should’ve been doing, haunt me, mixed with images of all the ways I can rip his damn throat out.
I’ve tried to forget it and move on, but I can’t.
Ways to inflict even just a small portion of the pain he made me feel fucking consumes me.
Somewhere in his fucked up, twisted mind, he thought it would be okay to share my girl.
Now…
Now, he gets to see what it feels like to share what is his.
Brooke Collins…
Hopefully she can handle both of us, because I intend to make Cole work for her.
The hard part will be making sure she falls for the right one in the end.
I don’t intend for that to be me…
At least, not until I get a taste of her.
That one touch alone is enough to change the fucking game. 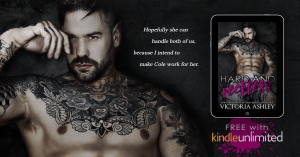 Jameson Daniels is part of the security team at a nightclub called Club Reckless. He works there with his best friend of twenty years, Cole King. His world is rocked when he learns Cole slept with his girlfriend of four years. Cole is like family & he can’t believe he’d betray him this way. Jameson is furious & decides the only way he can move past this is to make Cole pay in some way. He needs Cole to feel a little of what he’s feeling.

Cole has a gorgeous woman named Brooke Collins he’s starting to care about. Jameson wants to make Cole work for his girl. He plans to get her attention, make her want him, and possibly do some sharing. After he’s had his fun he’ll back off, call it even, and move on. He wants Cole to know how it feels to share his girl, & this won’t be the first time they’ve pleasured the same woman.

Brooke Collins is a waitress who has been crushing on Cole King for a while. Now that she finally has his attention, she’s also caught the eye of his best friend Jameson. Jameson is sinfully delicious and making it clear to Brooke he wants her bad. She can’t help the way her body reacts when he’s near. She finds herself desperate for both Cole & Jameson. She needs them like she needs her next breath. She’s never been so hot and frustrated before. She’s dying to experience her deepest desires & fulfill her wildest fantasies.

-Curiosity has me wanting to know about this mysterious guy that just seemed to come out of nowhere, looking like pure sex and sin.

-Jameson’s body is enough to make a girl go stupid with need.

-It’s as if he has some kind of control over my body, just by touching his own.

-His hands. His mouth. His body. Everything about him is pure perfection.

Brooke gets her wish when it comes to Cole & Jameson, but soon realizes she’s in over her head emotionally when she’s so affected in every way by Jameson. She’s never felt so much with a man. Jameson’s plan begins to fall apart when all he can think about is Brooke. He wasn’t supposed to fall for his best friends girl. Will he step aside for Cole or take what he so badly wants? This book was super delicious & I can’t wait for the next one in this series!

-“My want for you is too strong to ignore.”

-Brooke was meant for me. I know this more now than ever.

-Why does he have to be so damn beautiful? My heart almost can’t handle him.

-The way this man makes me feel is unlike anything I’ve ever experienced in my entire life.