Michaela Olsson has found her soulmate in James Khan. There are just a few teeny, tiny problems…

One, he’s her boss, two, he’s too old for her, and three, well, he happens to be engaged to somebody else.

She’ll take this crush and bury it deep. She’ll take it to her grave. James already belongs to another, so she’ll lock her secret up so tight it’ll be deprived of oxygen, suffocate and die.

Matters are only made worse when James asks her to move into his newly purchased house to supervise the renovations. Working together every day is bad enough, but living in a house he owns is far more intimate than she expected. Then, when James decides to call off his wedding without any explanation whatsoever, Michaela wonders if perhaps her feelings for him aren’t as one-sided as she thought.

While he was engaged James shared a flat with his fiancée, but now he’s moving into the house that Michaela has been living in by herself. She hadn’t intended for it to happen, but the place has started to feel like home, and with the object of her affections suddenly sharing her living space, things become infinitely more complicated. And heated.

Soon Michaela learns she might’ve had more to do with James calling off his engagement than she could’ve possibly imagined.

Something in the Air is book #2 in the Running on Air Series but can also be read as a standalone.

”I belonged to him body and soul. And he had no idea.”

I’ve been dying to get to James and Michaela’s story since the start of this series. Michaela has been hopelessly in love with her boss, who’s also engaged. She’s struggled with these feelings because she knows how wrong it is to covet another woman’s man. The fact that she goes through inner turmoil and works hard to keep her crush hidden, shows what a sweet soul she is. James has been inexplicably drawn to Michaela since the day they first met but he doesn’t realize his true feelings until he suffers a great loss. Newly single, James finds himself gravitating more towards Michaela and soon they embark on a steamy affair. 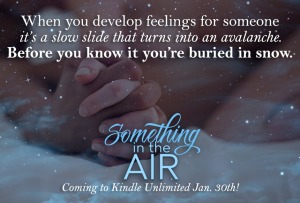 Is it too soon after James’ breakup for this new relationship to be considered anything other than a rebound? When his ex starts popping up in their lives, will Michaela be the one to end up with a shattered heart?

”SOMETHING IN THE AIR” releases on January 30th!