A one-night stand born from vengeance in a foreign land.
An explosive chemistry neither of us could deny.
We signed a contract on the back of a Boar’s Head Pub napkin that said if we ever met again, we would drop everything and be together.
Eight years and thousands of miles later, he’s here.
In New York.
And he’s America’s music obsession.
The intangible Irish poet who brings record executives to their knees.
The blizzard in my perfect, unshaken snow globe.
Last time we spoke, he was a beggar with no intention of becoming a king.
But a king he became, and now I’m his servant.
I’m not the same broken princess Malachy Doherty put back together with his callused hands.
I have a career I love.
A boyfriend I adore.
An apartment, a roommate, a life.
I changed. He changed, too.
But Mal kept the napkin.
Question is, will I keep my word?

We were both lost in that kiss. Found in it, too. She is standing outside. I’m standing inside. And between us is a small, significant distance I really need her to be brave enough to cross.

INCREDIBLE!!! I have only read a couple of L.J. Shen’s previous books and all I can say is that I truly underestimated her as an author. ”IN THE UNLIKELY EVENT” just about blew me away. It was a true page-turner. I found myself consumed by this story from the very start. This was a second chance romance full of unbearable angst, out of this world steam, and a Hero whose cruelness nearly tore my heart out.

Mal and Rory met in Ireland when they were both too young and life was taking them in different directions. They shared a passionate night and although their time together was brief, it left a lasting memory. On a bar napkin, Mal and Rory wrote out a contract that states that they wouldn’t try to find each other but if one day they happen to meet again, then they will be together no matter what circumstances they’re in at the time.

Eight years later, Mal is a famous songwriter and Rory works as a photographer for a record label. They wind up working on a project together which brings Rory back to Mal’s hometown back in Ireland. Rory is in a relationship and Mal is married. Mal is not the same sweet and charming Busker that Rory had fallen in love with so many years ago. He’s cold and downright cruel, which is truly baffling. Up until that point, there was nothing to indicate that the two left off on bad terms. As the story progresses, it’s the chapters that take us back in time that will reveal what caused Mal’s pain and why he blamed Rory for it all. Once the truth comes out, it’s almost as if the eight years apart never existed but there are still a few secrets that have the potential to wreck their lives beyond repair. 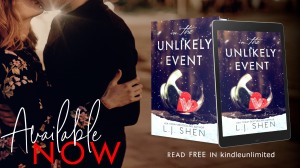 I am so thoroughly impressed by this author right now. The ”Notes” from some of the secondary characters, including the napkin, that were added at the end of some of the chapters was an ingenious idea. They sometimes provided comic relief and most of all helped to depict some of the characters in a different light. Go into this book knowing that nothing is at it seems and trust that journey to get to the end is well worth it!!

”IN THE UNLIKELY EVENT” is currently available!! Bump this one up your TBRs if you haven’t already!