Dean Walker is all about keeping life simple. He’s effortlessly talented and intelligent—spending his summers playing drums in the local band and the rest of the year teaching high school in the same Jersey town where he grew up. He likes his love-life simple too, enjoying the commitment-free hook-ups his good looks and sexy charm have always made oh-so easy.

Then he meets Lainey Burrows. And his simple, easy life gets turned upside down.

One wild one-night stand was all it was ever supposed to be, so Lainey is shocked when she discovers that her sizzling summer fling is also her son’s new math teacher. But that’s nothing compared to the most unexpected twist of all—their hot hook-up left Lainey knocked-up, and now they’re about to become parents. Together.

What ensues is an addictive, insatiable, sweet and tender romance that won’t be simple, but it will be more than worth the fight.

She sighs into my mouth when I press my lips against hers, stroking the hot cavern of her mouth with my tongue. And there’s a blissful relief in having her in my arms again—after all this time—feeling her against me. Good and right and mine. It’s a perfect space of bliss and pleasure carved out for just the two of us that I never ever want to leave. 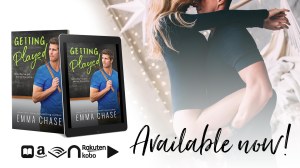 This is the reason why Emma Chase has remained one of my most beloved authors for the past several years. She is by far, one of the best romantic comedy authors out there today. The ”Getting Some” series is yet another winner to add to her illustrious book of works. I can’t think of one thing about this latest book that I didn’t love. It has a terrific plot, an amazing Hero and Heroine with combustible chemistry and some unforgettable secondary characters. I could not get enough of Dean and Lainey’s story.

Dean and Lainey meet one sultry summer night at a bar down at the Jersey shore. Crazy sparks generate between them and they end up sharing a night filled with mind-blowing sex that neither will soon forget. Although it’s been months since they’ve seen each other, neither has been able to forget that incredible night and soon their paths will unexpectedly cross again when Lainey and her teenaged son move to the town that Dean calls home. Not only are they living in Lakeside, but Lainey’s son also happens to be the new student in the high school AP Calculus class that Dean teaches. When they finally come face to face, Dean learns that Lainey has a big surprise to share with him. She’s three months pregnant with his baby. 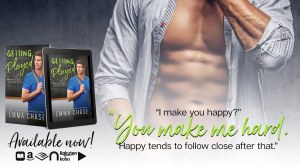 Dean has been living the carefree life of a bachelor up until now and has never had the urge to settle down, but there’s something special about Lainey that inexplicably draws him to her. Dean is starting to question whether or not he wants to remain the sexy Rock God who jumps from one woman’s bed to the next. When he tries to play the role of the faithful and monogamous boyfriend will former temptation cause him to lose the beautiful family that he was slowly starting to build with Lainey?

”GETTING PLAYED” is currently available! Make sure to one-click.