Thea Quinn has no idea what she is. All she knows is that her abilities have been a plague upon her life since she was a child. After years of suffering at the hands of a megalomaniac, Thea escaped and has been on the run ever since.

The leadership and protection of his pack are of the utmost importance to Conall MacLennan, Alpha and Chief of Clan MacLennan, the last werewolf pack in Scotland. Which is why watching his sister slowly die of a lycanthropic disease is emotional torture. When Conall is approached by a businessman who offers a cure for his sister in exchange for the use of Conall’s rare tracking ability, Conall forges an unbreakable contract with him. He has to find and retrieve the key to the cure: dangerous murderer, Thea Quinn.

Thea’s attempts to evade the ruthless werewolf are not only thwarted by the Alpha, but by outside dangers. With no choice but to rely on one another for survival, truths are revealed, intensifying a passionate connection they both fight to resist. At war with themselves and each other, Conall and Thea’s journey to Scotland forces them to face a heartrending choice between love and betrayal.

Conall wanted to touch Thea. Everywhere. And he wanted her to touch him. It was a haze that made his heart race, his breathing deepen, and everything else in his world fade out. All he was left with was want. For this woman.

INCREDIBLE!! I have always been a huge fan of Samantha Young and have read a bunch of her traditional adult contemporary romances, but, WOW, she has proven she can also write a spellbinding and all-consuming paranormal romance as well. I was completely hooked from the start. It’s been a while since I’ve read this genre and I’m realizing it’s time to dive back in. ”WAR OF HEARTS” is an epic story filled with intrigue and incredible main characters whose romance will steal readers’ hearts and souls!

Conall is the Alpha of Clan MacLennan, the most powerful wolfpack in all of Scotland, if not the world. He is a man of honor who loves his family fiercely and will do whatever he can to protect them and his pack. Conall’s younger sister is slowly dying from an incurable illness. It is for this reason alone that he agrees to track a woman on the run for a wealthy American businessman. Normally humans avoid trespassing on his compound and Ashforth’s arrogance rubs Conall the wrong way, but when Ashforth tells him that the woman’s blood can cure his sister Callie, he proves that he has a bargaining chip that Conall can’t resist. Ashforth seeks his assistance because it is a well-known fact amongst werewolves and vampires, that Conall has a gift for tracking anything and anyone.

Thea Quinn is the woman Ashforth is desperate to find. He describes her as being a thief and a ruthless killer to bias Conall’s opinion of her, but in reality, Thea is the victim of Ashforth’s diabolical desires. She lived with Ashforth and his family for years after her parents died in a tragic plane crash. It wasn’t until that crash that Ashforth found out that Thea wasn’t human. He physically tortured her for many years in order to learn what she was. She may be living on the run and in squalor, but she would rather be homeless than end up back on Ashforth’s compound. Thea could use her powers to live the life of luxury and yet she never abuses them because her parents always told her to use her powers for good and not for self-gain. 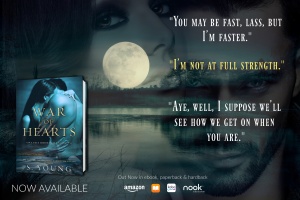 When Conall tracks down Thea, they play a game of cat and mouse. Conall learns quickly that Thea is not a weak damsel in distress. She has no problem taking him down with ease. They both feel an intense connection to each other and their passion will consume them. When Conall learns the truth about Thea’s past with Ashforth, his heart will be deeply conflicted. Can he sacrifice the life of the woman he is falling for to save the life of his sister? Or can Conall and Thea work together to solve the mystery of what type of immortal being she is, which may end up being the one solution to all of their problems?

I am so excited to find out what Samantha Young has in store for us next!! I’m hoping for a bunch of installments because I’m not ready to say goodbye to these characters yet!!

”WAR OF HEARTS” is available now!! Make sure to one-click!!