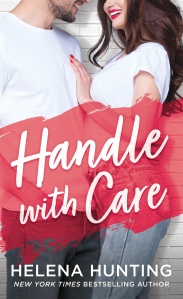 HE WANTS TO LOSE CONTROL.
Between his parents’ messed up marriage and his narcissistic younger brother, Lincoln Moorehead has spent the majority of his life avoiding his family. After the death of his father, Lincoln finds himself in the middle of the drama. To top it all off, he’s been named CEO of Moorehead Media, much to his brother’s chagrin. But Lincoln’s bad attitude softens when he meets the no-nonsense, gorgeous woman who has been given the task of transforming him from the gruff, wilderness guy to a suave businessman

SHE’S TRYING TO HOLD IT TOGETHER.
Wren Sterling has been working double time to keep the indiscretions at Moorehead Media at bay, so when she’s presented with a new contract, with new responsibilities and additional incentives, she agrees. Working with the reclusive oldest son of a ridiculously entitled family is worth the hassle if it means she’s that much closer to pursuing her own dreams. What Wren doesn’t expect is to find herself attracted to him, or for it to be mutual. And she certainly doesn’t expect to fall for Lincoln. But when a shocking new Moorehead scandal comes to light, she’s forced to choose between her own family and the broody, cynical CEO.

”It’s always been real, Wren. This is you and me choosing to acknowledge it and own it. Now we see where it goes from here.” 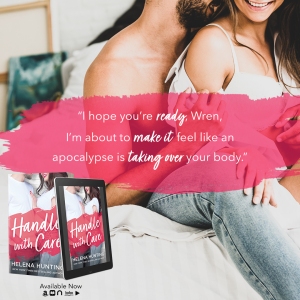 There is no denying why Helena Hunting is a New York Times best-selling author! She is one of the few writers that can consistently deliver when it comes to chart-topping hits. The Shacking Up series instantly became one of my favorites by this amazing author. The banter between Lincoln and Wren had me laughing out loud often and their chemistry was sizzling hot. I loved how they were very much equals and that Wren was a tough as nails Heroine. I found myself breezing through this one. There was never a lull during the progression of the plot, which I was grateful for. I’m not a fan of the “slow burn”. While there wasn’t a lot of drama being created between Linc and Wren, there’s a mystery that comes to the surface which will keep readers guessing.

We meet a new character which I’m hoping means that we’ll get at least one more book because I’m not ready to say goodbye to this series yet.

”HANDLE WITH CARE” is currently available!