Every little girl dreams of the fairytale. The one where the white knight rushes in to save her from the clutches of evil. They fall in love, have babies, and live happily ever after.

By that definition, my life should have been a fairytale too.

When I was eight years old, Caven Hunt saved me from the worst kind of evil to walk the Earth. It didn’t matter that I was a kid. I fell in love with him all the same.

But that was where my fairytale ended.

Years later, a one-night stand during the darkest time imaginable gave us a little girl. It was nothing compared to the pitch black that consumed me when I was forced to leave her with Caven for good.

At the end of every fairytale, the happily-ever-after is the one thing that remains consistent. It wasn’t going to be mine, but there hadn’t been a night that passed where I hadn’t prayed that it would be hers.

I owed Caven my life.
However, I owed that innocent child more.
And that included ripping the heart from my chest and facing her father again.

We were two people who had experienced the inside of Hell and lived to see the other side. Every once in a while, the flames would still devour me. The least I could do was try to extinguish hers. 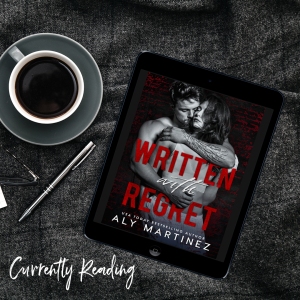 ”WRITTEN WITH REGRET”, the latest by Aly Martinez, is nothing short of absolute literary PERFECTION! This author never ceases to amaze me. Her stories are so unique and thoroughly entertaining. I thought I knew where the plot was headed, and that was a big mistake on my part! I should have known that the author would throw in a twist that would come as such a shock to me by the time I got to the end of this first installment, that I must warn ends with a HUGE cliffhanger! I don’t think I can wait to get my hands on the next book!

If you love single daddy romances, you are going to be in for such a treat!! Caven Hunt was the ultimate playboy who was about to close on a billion dollar high tech business deal. Then one night a tiny newborn baby girl that gets left on his doorstep changes his life forever. It turns out the beautiful redhead he had a scorching hot one night stand with has left him with an impossibly huge responsibility that he’s not even close to being prepared for.

The story fast forwards to four years later and Caven has become an adorably devoted father to his cute and precocious little baby girl with curly red hair and expressive green eyes. There is no way readers aren’t going to fall madly in love with Caven and little Rosie!

Caven’s world is turned upside down when his long lost baby mama makes a surprise appearance at Rosie’s fourth birthday party. There isn’t anything he wouldn’t do to keep his girl safe and Hadley will feel his wrath, but all she wants is a chance to get to know her daughter. Caven is rightfully suspicious of Harley’s intentions and keeps his guard way up. There’s so much anger and animosity inside of him towards Hadley but when she reveals that they share a connection to a haunting past, he starts to see her in a new light. He’s torn up inside with guilt, anger, and burning desire, that he inevitably gives in to. Caven and Hadley reignite their passionate affair, but we know that trouble lays ahead for the two lovers.

Hadley reveals a piece of her past only to us readers during her chapters, and I thought I knew why she was keeping it a secret from Caven, but rest assured, you will be just as blown away as I was at the reveal at the end of book one!

”WRITTEN WITH REGRET” is currently available. It is a duet and if you hate cliffhangers, you may want to wait until book two releases on June 13th! I promise you this is a story you need to put at the very top of your TBRs!