My life was irrevocably changed the moment I stepped foot inside Elena Alderman’s grand front doors. A lifeless tomb on the edge of Chicago’s Southside, the Alderman home sat in one of the city’s oldest and wealthiest neighborhoods, and Elena Alderman was the queen.

She was also mad.

Not the kind of madness that’s readily apparent. No, her psychopathy was far more surgical—more…insidious. She was surrounded by beautiful things—most notably her grand piano and her adopted son, Henry.

I fell in love with both.

My gift blossomed when my fingers touched her black and white keys. But my life began when I became haunted by the boy. Henry Alderman was a handsome blend of arrogance and seduction, and as we grew up together, I found it more and more impossible to separate him from my thoughts. I envied his life. I imagined how my name—Lily—would look with his. I became his closest friend…and more. I gave him my kiss, locked away his secrets, and loved him even when it was hard to.

But we were just a game. Elena Alderman made the rules. And when she decided to change them, she broke everything.

At some point we began to rock our steps, and as Henry’s eyes reflect against the setting sun, the brown and green mix in a hypnotic gaze that stops my heart ever so briefly. It skips. I die, just for a breath. I die—and I come back. 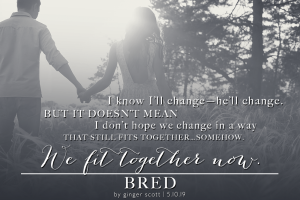 BRED is Ginger Scott’s incredibly angsty version of one of her all-time favorite stories, ”Great Expectations” by Charles Dickens. This is a coming of age romance between two teenagers who are from completely opposite scales of society but find they have more things in common than they do differences.

Lily’s living with her last remaining relatives after her parents died in a tragic car accident. She’s a lonely girl who finds a bit of happiness in the beautiful boy she meets during her aunt’s job interview with the boy’s mother. Henry is also drawn to the beautiful and shy young girl. Over the course of the first year of their friendship, his adopted mother, Elena, offers to provide piano lessons to Lily. Lily proves to have a gift and picks up the piano quickly. She ends up getting a scholarship to attend the same prestigious boarding school that Henry is going to as well. From there the angst ensues and it’s the conniving Elena that plays with their minds and hearts as if they are pieces of a chess game.

The story started off at a pace that was a little too slow for me. The plot turns interesting when things start to change between Henry and Lily, and earth-shattering secrets are revealed. I couldn’t wait to find out what was going to happen next for the young couple. Overall, this was a super angsty and enjoyable read.