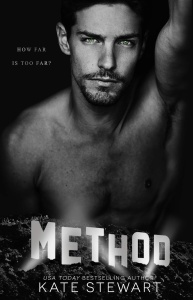 Hollywood is a temptress, a trickster, a soul-stealing devil. I married an A-list player, knowing I come second place to his craft. But Lucas and I are a golden couple, a modern-day fairy tale.

I’ve never doubted what we built…until the sudden death of Lucas’s best friend has scandal rocking the Hills and shaking the foundation of our relationship.

I chose Lucas as my safe haven…he chose the role of a lifetime.

For the next three months, I’ll share my nights with a stranger, watching as he buries his pain, immersed in his role and living as someone else.

We’ve done this before. I tell myself it’s just another movie, and he’ll return to me.

I should’ve known this time would be different.

To get my husband back, I’ll need the strength of ten men.

As it turns out, I’ll have to go through two.

Love isn’t the issue. It never was. We’ve had it in abundance, along with a healthy dose of trust. He’d rearranged our universe to revolve around the other, and once we did, we were both sealed in our fate, destined to be the moon and obeying tide. I glowed in his affection while he swept me away with one electrifying wave after another. 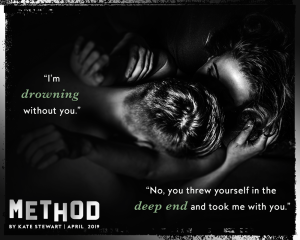 MIND BLOWN!!! I’m once again in awe of the incredible storytelling gift of this amazing author. Her words wreck my heart and then slowly puts it back together again. I feel like I’ve just gone ten rounds with Mike Tyson in the ring after having just finished ”METHOD”. This is truly one of Kate Stewart’s best works yet! Get ready to go on a wild and angst-filled ride with these amazing characters who will without a doubt steal your hearts.

Lucas and Mila are Hollywood’s current “IT” couple. Mila is living every woman’s fantasy. She’s a woman who is not in the industry who has won the heart of the biggest actor in Hollywood. From the moment these two met there was undeniable intense chemistry burning between them. They fell hard and fast. While their life has been like a living fantasy for nearly six years, their love is about to be put through the ultimate test by two epic life-changing events which happen at about the same time. Lucas wins the role of a lifetime soon after his best friend commits suicide. 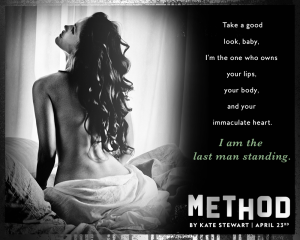 Lucas is a ”method” actor. When he is working on a project, he completely immerses himself in the role he is playing. There is no Lucas—only the character exists and this time it seems as if he has lost himself completely. Mila has been Lucas’ rock and support system for years but this time feels different. Her love and trust in the man who owns her soul are being challenged at every turn.

The story switches from the present to many moments from their past and not all in chronological order, but still was easy to follow. Lucas and Mila’s journey is filled with so many intense and painful emotions that I really did feel thoroughly exhausted by the time I got to the end of this story, but I wouldn’t have wanted it any other way.

METHOD is currently available and it’s a definite one-click MUST!