Spending a month filming a reality TV show with your ex is no picnic.

Especially when you’ve signed a contract stating that the two of you will not, under any circumstances, have romantic relations while filming.

Leanne Simmons and Callum Davidson never had an easy relationship. From enemies to lovers and back to enemies, they’ve been on again/off again for years. Things come to a head when Callum gets into an altercation with a rival for Leanne’s affections. Their management decide enough is enough and give them both an ultimatum: sign the contract or leave the show.

Unwilling to give up their livelihoods, Callum and Leanne sign on the dotted line. However, like always, they can’t resist making a bet. Callum thinks it’s only a matter of time before they break the agreement, while Leanne is determined to see it through.

Can she resist him for an entire month without losing her sanity? And what if this is the one bet that finally breaks them both?

Off the Air is a contemporary romance and Book One in L.H. Cosway’s brand new “Running on Air” Series. Each book focuses on a different couple and can be read as a standalone.

Tonight, we ran on air.
And tomorrow, we’d do it again.
The location might change, but one thing would stay the same.
I’d never stop holding his hand. 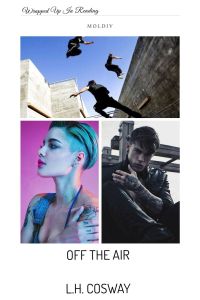 In ”OFF THE AIR” we dive right into Callum and Leanne’s tumultuous and highly toxic relationship. The novella ”AIR KISS” tells the story of how their romance began and it was a clear indication that their journey was going to be one serious angst-fest.

Cal and Leanne star in the U.K.’s top-rated reality show ”Running on Air”. From the moment they met there was an instant off the charts hot, chemistry burning between them. They ran hot too fast and early into their relationship tragedy hits them. While Cal is going through just as much pain as Leanne, he tries time and again to be there for her. Leanne, however, does everything in her power to push Cal away and to close off her heart to him. But he’s in her blood and letting go completely proves to be an impossible feat. They go through several years of a push and pull relationship.

Cal has a hot temper. He’s passionate and possessive of Leanne, but it’s clear to see how deep his love runs for her. Leanne constantly pushes him away and says hurtful things but still, he never gives up on her. I loved Cal but wished many times for him to stop being her punching bag. What happened wasn’t his fault and he needed comfort and compassion just as much as she did.

Leanne’s stubbornness is what made this story beyond angsty. She wasn’t a character that I found easy to like. It was only when she comes to the revelation of just how awful she had been treating Cal, that I was able to like her a little bit.

”OFF THE AIR” is currently available!