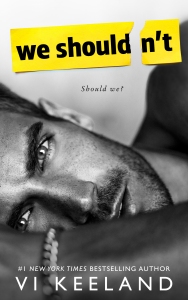 Bennett Fox walked into my life on one hell of a crappy Monday morning.

I was late for the first day at my new job—a job I’d now have to compete for even though I’d already worked eight years to earn it, because of an unexpected merger.

While I lugged my belongings up to my new office, a meter maid wrote me a parking summons.

She’d ticketed a long line of cars—except for the Audi parked in front of me, which happened to be the same make and model as mine.

Annoyed, I decided to regift my ticket to the car that had evaded a fine. Chances were, the owner would pay it and be none the wiser.

Except, I accidentally broke the windshield wiper while slipping the ticket onto the car’s window.

Seriously, my day couldn’t get any worse.

Things started to perk up when I ran into a gorgeous man in the elevator. We had one of those brief moments that only happened in movies.

You know the deal…your body lights up, fireworks go off, and the air around you crackles with electricity.

His heated stare left me flush when I stepped off the elevator.

Maybe things here wouldn’t be so bad after all.

Or so I thought.

Until I walked into my new boss’s office and met my competition.

The gorgeous man from the elevator was now my nemesis. His heated stare wasn’t because of any mutual attraction. It was because he’d seen me vandalize his car. And now he couldn’t wait to annihilate his rival.

There’s a fine line between love and hate—and we shouldn’t cross it.

We shouldn’t—but straddling that line could be so much fun.

”Thank you for loving me even when I hated myself.” My heart let out a big sigh. That’s the thing about love. We don’t fall in love with the perfect person; we fall in love despite a person’s imperfections. 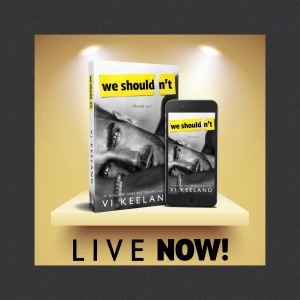 WE SHOULDN’T is an “enemies to lovers” office romance between two co-workers competing for the same job at their advertising agency. Bennett is a sexy, overly cocky, ladie’s man, who doesn’t believe in relationships. Annalise is the beautiful and sweet new co-worker who’s nursing a broken heart after being dumped on Valentine’s day. Bennett and Anna get off to a rocky start and things between them become even more strained when they learn they are rivals for the same job.

The sexual tension between them was a bit torturous and drawn out a little too long for my taste, and Bennett wasn’t a Hero that I found easy to love in the beginning. There were hints that he had gone through something tragic that obviously impacted his inability to commit to a woman and it was his endearing relationship with his twelve-year-old god son that humanized Bennett for me. He was a very frustrating character and his constant push and pull behavior towards Anna was borderline tiresome.

Once Bennett shows his vulnerability, the book became nearly impossible to put down. Bennett turned into the swoon worthy Hero he was always meant to be.

WE SHOULDN’T is currently available!