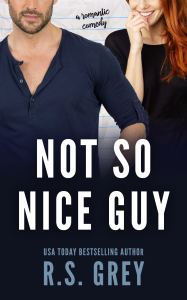 Just Ian is the biggest understatement of the century.
Just the Mona Lisa. Just the Taj Mahal. Just Ian, with his boring ol’ washboard abs and dime-a-dozen dimpled smile.

We’re extremely close, stuck so deep inside a Jim-and-Pam-style friendzone everyone at works assumes we’re a couple – that is until one day, word spreads through the teacher’s lounge that he’s single. Fair game. Suddenly, it’s open season on Ian.

He should be reveling in all the newfound attention, but to our mutual surprise, the only attention he seems to want is mine.

I want to assume he’s playing a prank on me, just pushing my buttons like always – but when Ian lifts me onto the desk in my classroom and slides his hands up my skirt, he doesn’t leave a lot of room for confusion.

I’m a little scared of things going south, of losing my best friend because I can’t keep my hands to myself. So, I’m just going to back away and not return this earth-shattering kiss – oh who am I kidding?!

Helloooo mister not so nice guy.

For three years, we were best friends who were secretly in love with each other. Three years is a long time to subdue a crush. 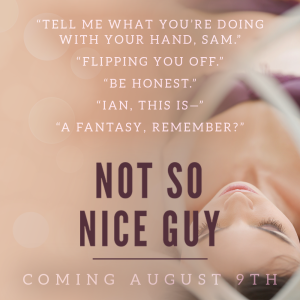 NOT SO NICE GUY is a romantic comedy with the friends-to-lovers trope. It is filled with so many laugh out loud moments. I fell head over heels in love with Ian and Samantha’s story. These two were so perfect for each other but seemed utterly clueless to that fact. Waiting for them to finally get together was almost torturous.

Ian and Samantha have been the best of friends ever since they met their first day of teacher’s orientation at Oak Hill High School. They live minutes from each other and have weekly Netflix binge fests of the West Wing. Samantha is a total nerd with the funniest sense of humor but also beyond gorgeous as far as Ian is concerned. But she doesn’t see herself that way. She thinks Ian is absolute perfection and in the past, he’s always dated women who looked like supermodels. Never in her wildest dreams would she think that he had feelings for her. Sam has been secretly in love with Ian since the first day they met, and Ian has also been crushing on her. It’s hard to believe that neither had a clue what the other was feeling.

Ian starts to have an inkling that Sam is into him. He can tell by how she is affected by him whenever they are in close proximity. He decides to take things out of the friend zone with Sam, and since she’s afraid of change he knows he has to take things slow with her. But one day she lets it slip in the teacher’s lounge that she and Ian are not dating. Suddenly Ian and Sam are being pursued by the other teachers at the high school. Ian is not about to let another man take what is his so this forces him to ramp up his plans to stake his claim on Sam.

Sam is overwhelmed by Ian’s confessions to her and terrified that if they try to become romantically involved that she may end up losing her best friend. Will she put her fears aside and take a chance on love? Or will she continue to try and play it safe and wind up losing the friendship anyway?

NOT SO NICE GUY is currently available!