It’s spring, 1970. The Vietnam War has been raging for years with no end in sight. Janey Martin, a California college student and aspiring journalist is tired of writing puff pieces about her university men’s sports teams. She wants to be taken seriously as a journalist and as a woman. With riots at their doorstep, her wealthy father sends Janey to the Sorbonne in Paris to finish her college education away from the chaos.

Janey is reluctant to leave the Big Story that is Vietnam, but vows to prove herself. Much to her dismay, her first assignment is to interview the hotshot star forward of a local soccer team. Janey is sure Adrien Rousseau is going to be like every other playboy jock she’s ever dealt with, but quickly learns there is much more to Adrien than meets the eye.

The mysterious, sexy footballer just might be the biggest story of Janey’s life.

First published as part of the Team Player anthology, releasing as a standalone with bonus, extended epilogue, April 19th!

I gasped, utterly unprepared for how the taste of him, the feel of him touching me like this, turned my bones to sand and stole my breath. 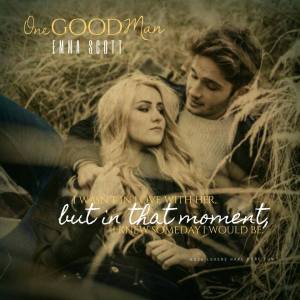 I have to admit that when I first started reading this one, I was skeptical that I would love a story that takes place in 1970, but I should have known that there is no way this author could ever write anything that I wouldn’t fall in love with! ONE GOOD MAN is AMAZING!!! If you’ve read any of Emma Scott’s works then you’ll know that you can never trust your first impression of her characters. You’ve got to let her take you on a journey and slowly the layers are peeled away and you’re left with some incredible characters. I fell so much in love with Adrian Rousseau, the talented center forward of the Paris Central soccer team. He was a beautiful man with an equally beautiful soul!

Janey Martin was a strong Heroine who had to deal with her fair share of discrimination and sexual harassment being one of the few women majoring in journalism, which was predominantly a core curriculum for men. This novella really strikes a cord given the fact that we are hit with so many new cases of sexual harassment against women and in some instances, men, being reported in the media on a daily basis now.

Janey is an American student who is sent to complete her college education at the Sorbonne in France, after getting entangled in a Vietnam War protest that ended up in her incarceration. She hopes to become a successful news journalist for the Times or Newsweek, but being a woman with striking good looks have not been in her favor. She’s not been taken seriously nor given any gritty assignments that she craves. Her latest assignment for the school paper is to interview Sorbonne’s most popular student who is on the fast track to becoming a professional Soccer player—Adrian Rousseau.

Their first meeting is less than cordial as both Janey and Adrian take turns throwing insults at each other which are based on typical stereotypes. But as the story unfolds they get past their own biases and realize that the people they are on the inside just might be that missing piece of the puzzle to their hearts.

This was one incredibly beautiful story told by the incomparable Emma Scott!!