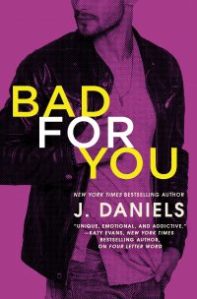 Shayla Perkins isn’t the kind of girl who makes the same mistake twice, especially when it comes to Sean “Stitch” Molina. So when he gives her the world’s biggest rejection, that’s it—she’s done. Until the sexy, silent, unavailable Sean makes Shay a very personal offer. Of course, it still doesn’t mean he’s interested in her. Or does it?

Sean has done things in life. Bad things. And he’s paid the price. All he wants now is to make up for his past by doing good in the present. And no one deserves more good than Shay. Beautiful on the inside and out, Shay is the kind of woman who should be cared for and protected—especially from a man like Sean. He’s tried to keep his feelings for her in check, but a single, reckless impulse pulls them closer than ever before.

Soon the two are sharing their biggest dreams and satisfying their deepest desires. But what will happen if the only way to truly give one another want they want most . . . is to let each other go?

I wasn’t nothing to her, and I did not fucking understand that, but fighting her, fighting this…I couldn’t do it.
How the fuck could I stay away? How could I go back to being nothing to everyone when what she was offering felt so fucking good?
You put food in front of a starving man, he’s going to eat it. No matter if he thinks he deserves it or not. It was about survival.
And Shayla was keeping me alive. 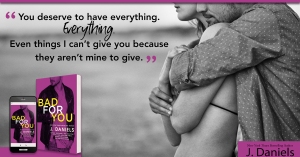 BAD FOR YOU, without a doubt, is going on my “Best of 2018”shelf! I’m kicking myself because I should have been reading this author’s books a lot sooner! This book had it all—beautiful broken hero, phenomenal heroine, and a story that will absolutely melt your hearts! I can’t tell you how many times I had tears in my eyes! I kept looking at my progress, hoping that I wasn’t nearing the end! Now, this is how you write a story!! I promise you, this is a book that deserves all the stars and you will not regret picking this one up!

Sean Molina has never had an easy life. When the story first opens we witness his struggles as a young boy. Being a victim of child neglect, he had to fend for himself for the very basic necessities of life that no child should have to be without. Sean learned early on that his mother was never going to provide for him or give him the loving and nurturing environment that he so deserved. He had to steal food and clothing just to survive and later on in life he would turn to a life of crime because that’s all he had ever known. He made one huge mistake which landed him in prison but his biggest regret was that it took him away from his two little girls.

After serving his time and getting released from prison, he’s determined to live his life on the right side of the law and to make something of his life for his two girls. He ends up getting a job as a cook at a restaurant. It is there that he meets Shayla…the woman that would change his life completely.

Shayla is full of life and love. She’s got a dream of opening her own hair salon and it’s just within her grasp. She is so beautiful inside and out. I really loved this character! From the moment she saw Sean, she had fallen hard. In the beginning, they would share some quiet time together at the restaurant and she enjoyed her conversations with Sean. But then she tried for more with him and it scared Sean. Sean has the worst self-confidence and in his mind, he wasn’t good enough for Shayla, and so he pushed her away. For several months things were strained between them until one night he catches Shayla crying and he can no longer stay away.

Sean comes to Shayla’s rescue when she needs it the most and he proves to be her biggest comfort and the most dependable person in her life. Now that she’s witnessed the beauty that’s within him, she is prepared to fight when he again, tries to push her away. Sean is no match for the 5’2” spitfire who wants nothing more than to shower him with love and to show him that he could never be NOTHING. Years of being told that he was nothing by his mother, really damaged Sean’s psyche. Shayla does everything she can to convince Sean that he is someone worthy of the good things in life…especially love.

Little by little and piece by piece she helps to put his life back together. If anyone deserves to be labeled a Saint, it would be Shayla. Her love is healing Sean and he knows that he needs to hold on to Shayla and never let her go.

But you know that whenever things are going perfectly for a couple, there’s always something lurking around the corner that’s ready to tear their world apart. And I knew what was coming but how it all ends? Now that I didn’t expect and well it was the cherry on top of an already perfect story!!

BAD FOR YOU is currently available!! Make sure you one-click and that you free up your reading calendar because this is not a book you’re going to want to wait to get to later!!

Shayla Perkins is a beautiful 23 yr. old woman living in Dogwood Beach. She works as a waitress at Whitecaps Restaurant picking up as many shifts as she can so she can save money. For as long as she can remember she’s wanted to work for herself as a hair stylist. That dream is suddenly becoming a reality. So while things are going great professionally, her personal life is lacking. She’s completely infatuated with the cook at her work. Sean “Stitch” Molina is sexy, silent, and unavailable. She thought they’d developed a friendship, and then he is putting on the brakes and shutting her down. The problem is she still has a massive crush on the motorcycle riding hottie, & can’t get him out of her heart or her head. She’s tried to be done with him since he rejected her, but then he shows her kindness by helping her out of a bind, and everything changes.

Sean Molina hadn’t been offered many chances in life. Nobody had ever cared about him. If he wanted or needed something he took it. He’d done bad things, and paid the price. Now he had been given an opportunity with his job at Whitecaps, and he couldn’t screw it up. He wanted to work hard, and change his path. To make up for his past mistakes. He’d tried to stay away from his co-worker Shayla because he thought she deserved better than him, but when he see’s her upset, he can’t turn away. His good deed gets him involved in her life. They begin spending time together & he has trouble keeping his feelings for her to himself. Soon they fall for each other, and can’t fight the pull between them, but things get complicated because Sean doesn’t think he’s deserving of anything good. When you grow up being told your nothing, it’s hard to accept something so special and real. Will Sean continue to push Shayla away, or will he accept the love she’s offering?

-No one had ever looked at me the way Sean did.

-The man had a stare unlike any stare. Equal parts intense and intimidating. But his eyes, sweet mother of God, his eyes were unreal, this rich, golden copper color. And when they were on you, you didn’t just see that beauty- you felt it.

-“I haven’t been this attracted to someone my entire life, I don’t think. I like everything about you.”

-I was someone to her, and fuck, did that mean everything.

This was a beautiful, emotional story about the power of love and how it can heal you heart & soul. I really enjoyed this book, and love this series!