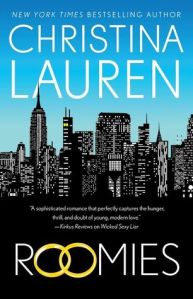 From subway to Broadway to happily ever after. Modern love in all its thrill, hilarity, and uncertainty has never been so compulsively readable as in New York Times and #1 international bestselling author Christina Lauren’s (Beautiful Bastard, Dating You / Hating You) new romance.

Marriages of convenience are so…inconvenient.

Rescued by Calvin McLoughlin from a would-be subway attacker, Holland Bakker pays the brilliant musician back by pulling some of her errand-girl strings and getting him an audition with a bigtime musical director. When the tryout goes better than even Holland could have imagined, Calvin is set for a great entry into Broadway—until he admits his student visa has expired and he’s in the country illegally.

Holland impulsively offers to wed the Irishman to keep him in New York, her growing infatuation a secret only to him. As their relationship evolves from awkward roommates to besotted lovers, Calvin becomes the darling of Broadway. In the middle of the theatrics and the acting-not-acting, what will it take for Holland and Calvin to realize that they both stopped pretending a long time ago?

I’ve had the thought almost without realizing it–the encroaching awareness that I feel settled but in truth can’t see my future at all. I have a temporary job, a temporary marriage. Will anything ever be permanent? What the hell am I going to do with my life? I only get one shot at this, and right now, I’m finding my value only in being valuable to others. How do I find value for me? 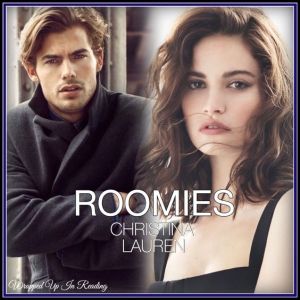 I just spent an entire day getting lost in this amazing book! ROOMIES deserves all of the stars for a rating. The plot, characters, and even the vibrant description of the music made this story simply sublime! I never wanted it to end. I fell in love instantly with Holland and Calvin and their slow-burning romance had my heart pounding with anticipation, but never did I feel that there was a lull in the progression of their story. It’s so hard to find a book that has the perfect pace to keep me fascinated from beginning to end, but this one knocked me off of my feet! It’s definitely going on my ”BEST OF 2017” list.

Holland Bakker lives in a small apartment in New York City that her uncles help pay the rent on. She works for her uncle Robert whose musical is a huge hit on Broadway. Holland’s life is in limbo. She’s not pursuing her dream of becoming a writer. It seems as though she’s stuck in a rut and doesn’t know how to move forward. There’s one thing in her life that brings her joy and excitement—a handsome and gifted guitarist whom she sees several times a week playing outside her train station. For six months she’s been crushing on the guy but never has gotten the nerve up to talk to him, then everything changes when she is nearly mugged and pushed on to the train tracks by a homeless man, and her crush comes to her rescue.

When she wakes up in the hospital Holland is a little surprised when the police and hospital staff assumed she was suicidal. She learns that sexy guitar man never reported to the police what actually went down on the subway platform. A couple of nights later, her friend drags her to a dive bar to see a local band play and is floored when she sees a familiar guitar player. Holland approaches him after his set and Calvin’s apologetic demeanor and sexy Irish accent quickly wins her forgiveness. She’s still replaying their conversation over in her head days after their encounter at the bar. When the lead violinist who has several pivotal solos in her uncle’s Broadway show ends up quitting, Holland has an epiphany. She knows that Calvin could take over the lead and he would be brilliant at it and with a little convincing she gets an audition set up for Calvin. He blows everyone away with his raw talent but drops a bomb when he confesses that he can’t accept the job because he’s been in the country illegally for the past four years.

Holland normally plays it safe and never does anything truly crazy but her love for her Uncle and her desire to help Calvin achieve his lifelong dream has her ”proposing” that they get married so that Calvin can get his green card which would allow him to be in her uncle’s show. From the very moment she approaches Calvin with her crazy plan, you can feel this intense chemistry between them. Calvin is so incredibly sweet and charming it was easy to fall madly in love with his character. What makes the story perfect is that the heroine was also just as lovable. Her inherent nature to always put others before herself and her inability to see that she was someone worth loving made her character so endearing.

I was dying from the anticipation for when they would realize that their relationship was far from ”fake” and well when it happens let’s just say we are taken on a rough and wild rollercoaster ride full of angst and emotions. Theirs is not an easy road to true and everlasting love but I always say it’s the level of angst that makes the ending that much sweeter.

ROOMIES is currently available! It’s one I highly recommend you read ASAP!

Holland Bakker is a 25 yr. old woman living in Manhattan. She’s the youngest of six siblings & has a degree in English. She’s an aspiring writer who isn’t following her passion. She’s working as an archivist/errand girl at a theater. The highlight of her day is her not so random trips to the subway station to watch a busker play his guitar. She’s watched this street musician for months. She has an ear for music, & is drawn to him. His music demands her attention & makes her feel everything. They’ve never met, but that all changes when the beautiful musician rescues her when she’s in danger.

When the theater Holland works at is looking for someone new for their production, she thinks of the gorgeous, talented, Irish musician she’s been crushing on. She gets him an audition with the music director and they offer him a spot in the orchestra. His name is Calvin Mcloughlin, and his student visa has expired. He’s being offered his dream, but unfortunately he’s illegally in the country. Holland has never been a risk taker. She’s bored with her life & wants to help Calvin. She offers to marry the sexy Irishman so he can stay in New York.

-“I think I’ve made it pretty clear you can have me if you want me.”

Holland married the stranger she’s wanted since before they ever even spoke. Their sharing an apartment, & she’s infatuated with him & his music. He becomes a star & soon she has a famous Broadway husband. Roommates turn to lovers, and suddenly they’ve stopped pretending, and everything is so real between them.

I loved EVERYTHING about this book! It’s one of my top favorites for the year. I adored Calvin & the chemistry between them was amazing. This book was sweet, sexy, full of angst, & had all the things I look for in a book. It was fabulous!!!