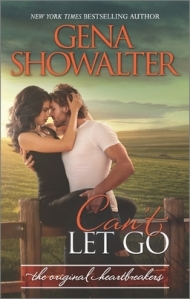 With trust issues a mile long, Ryanne Wade has sworn off men.  Then Jude Laurent walks into her bar and all bets are off.  The former Army Ranger has suffered unimaginably, first being maimed in battle then losing his wife and daughters to a drunk driver. Making the brooding widower smile is priority one. Resisting him? Impossible.

To Jude, Ryanne is off limits. And yet the beautiful bartender who serves alcohol to potential motorists tempts him like no other. When a rival bar threatens her livelihood, and her life, he can’t turn away.  She triggers something in him he thought long buried, and he’s determined to protect her, whatever the cost.

As their already scorching attraction continues to heat, the damaged soldier knows he must let go of his past to hold on to his future…or risk losing the second chance he desperately needs. 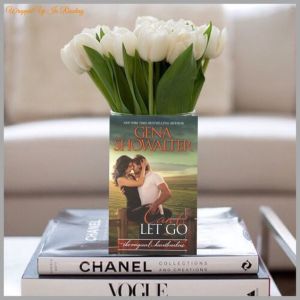 CAN’T LET GO is an enemies to lovers romance between a broken Hero and a feisty Heroine. I was intrigued by the couple while reading the previous book and I knew that their story was going to be one I could not pass up. Jude and Ryanne have incredible chemistry and whenever they’re in each other’s presence, you can feel the tension building. It was inevitable that they’d be giving into their passion and let me just say it was INSANELY HOT! I was not in the least bit disappointed!

Ryanne Wade owns the local bar in Strawberry Valley. She has had to deal with a lot of judgment and harsh criticism from some of the town folk throughout her years because of her mother’s tarnished reputation. Ryanne has made it her life’s purpose to be nothing like her mother and that ended up with her love life being non-existent. But there’s one man who gets her insides burning and also ignites her temper, and that’s the sexy as hell, ex-army ranger, Jude Laurent, who spends most of his time scowling and throwing insults at her.

Jude has suffered loss that would have obliterated most. A drunk driver destroyed his life one stormy night when he decided he was ok to get behind the wheel and ended up killing his wife and little twin daughters. Jude is but a mere shell of the man he used to be. He is plagued by his grief and unimaginable guilt he still feels over the deaths of his family. It’s been two and a half years since they passed and he has never had the desire to move on or to get romantically involved with another woman, but Ryanne has stirred something inside of him and he’s overwhelmed by his feelings that he’s not at all ready to face.

When a shady businessman decides to open up a nightclub across from Ryanne’s bar and he soon wreaks havoc on her life and livelihood, Jude jumps in to handle the security of her bar and also designates himself her personal bodyguard. This delights Ryanne since she can’t help but admit that she is extremely attracted to Jude but he’s as cold as ice and seems almost impervious to her charms. With each passing day, Jude is finding it hard to fight his attraction towards Ryanne and when they finally let go of their fears and give in to their feelings, they both agree that it will be a one-time thing. Once they’ve had a taste, neither of them are satisfied with the one and done scenario.

Ryanne has dreamed of traveling abroad almost her entire life and has a month long trip to Italy already paid for. So the two agree to continue their heated affair until she leaves for Italy in a few months.

Will they be able to let each other go when their temporary relationship has met its expiration date? Can Ryanne break through all of Jude’s defense mechanisms and ultimately own a piece of his heart?