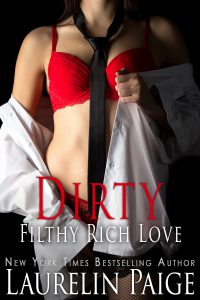 Even after knowing what I know now, I still want to talk to him, to touch him. But there’s an ocean between us, and I’m not sure it can be crossed with something as easy as a phone call or a plane ride.

Yet I’m willing to try.

He doesn’t know this yet, but this time I’m the one with the power. And maybe – just maybe – if the air were cleared and all our secrets bared, there could still be a chance for us.

And this dirty, filthy thing between us might end up being love after all.

Sabrina Lind is a gorgeous 27 yr. old woman who lives in New York & loves her job as the director of marketing strategy at Reach, Inc. Her love life is more up in the air. She’s crazy about a complicated, beautiful man named Donovan Kincaid. He keeps her on edge never knowing where she stands with him. She’s addicted to his body & the way he makes her feel when they’re together. He gives her something no other man can give her. He’s intense, controlling & possessive, but she keeps coming back for more. She soon discovers secrets he’s been keeping & feels betrayed and hurt, but still wants him. She wants to see if there’s still a chance for them, & thinks if they can just talk & have everything out in the open, maybe they can finally be together. She wants him to stop running when things get tough. She needs explanations, & less distance between them. She’s willing to try & wonders if what they have could be love?

-Donovan. Fucking Donovan in his tailored suit and five o’clock shadow. Walking toward him was like deciding to walk through fire when I was already covered with first-degree burns. It hurt like I couldn’t describe. But I was a girl who lived in darkness. His fire sure looked bright.

-He knew exactly what he did to me.

-He knew me. He knew what I needed.

-He knew how to make me sing; like he had me memorized.

This is one of the best series I’ve ever read, and one of my favorite book boyfriends. I absolutely adore Donovan Kincaid! He’s totally obsessed with Sabrina. It’s crazy, passionate, & hot as hell! He’s 100% alpha & so damn sexy. I loved how they met in college, & the bit of a love triangle. I also liked how in this book Sabrina has more power in the relationship, & we get to see a more vulnerable side of Donovan. I loved this book & this man so much! Hands down my favorite Laurelin Paige series!!!

-“I noticed you the first day you walked into the classroom, Sabrina,” Donovan said. “That’s when it began for me. And it never stopped.”