Trevor Cross came into Reya Cabrera’s world with a bang and faded out with a whimper. They vowed to make it work, but life had other plans. After chasing his TV dreams for years, Trev finally became the UK’s next big reality star, but he alienated his family and friends in the process. Now he finally has everything he ever wanted. Women. Money. Fame. But none of it means anything when he doesn’t have the one thing that matters most: love.

Money leaves a gaping hole. Fame surrounds him with loneliness. And no woman makes him feel like Reya used to before the whirlwind of success pulled them apart.

He has a plan to get her back. However, with a hectic filming schedule looming, the only way to do that is to convince her to come on the road with him. Reya has been stuck in a rut for a while, and the opportunity to travel across Europe and play her music for new audiences seems like heaven. The only catch? She has to do it with the one boy who ever got close enough to break her heart. But he’s not a boy anymore, and as she gets to know him again she can’t deny her respect for the man he’s become.

Every time she’s around him her heart feels full of air, like a balloon about to pop. Little does she know, Trev’s feelings are just as tumultuous as hers. One thing’s for sure, these three weeks on the road together will either make them whole again or break them irrevocably.

**Hearts on Air is a contemporary romance and book #6 in the Hearts series, however it can also be read as a complete standalone.**

Bold, colorful and totally exciting. Hearts On Air is a beautiful adventure that transports the reader to beautiful places and experience emotions that will make our hearts jump with the flip of every page. 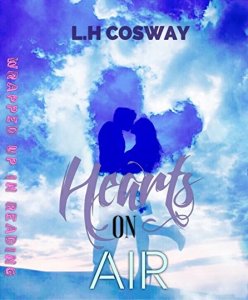 Trevor and Reya have been best friends for years. Reya’s always had a major crush on the younger of the Cross brothers, but she’s had to hide her feelings after Trevor put her in the friend zone. These two always have the best time together; their banter is hilarious and totally contagious throughout the book. The truth is that Trevor also has feelings for Reya but he doesn’t feel worthy of her so he’s never tried to show how he really feels.

Trevor’s dream to become a reality star, showcasing his Parkour talents has finally become a reality. He’s been given the opportunity to travel from city to city doing amazing stunts, quickly becoming a household name. Fame, women, and money are what Trevor always thought he wanted but all the success doesn’t taste as sweet when he doesn’t have his family and friends close to him. Trevor has learned a lot about himself in the time he’s been away. He’s been fighting hard with the demons that haunt him. He misses Reya, and even though he doesn’t have it all figured out, one thing he knows for sure is that he doesn’t want to spend one more day without her.

The chaos that is Trevor Cross was feeding the deep insecurities that Reya’s always had. She hides behind her music, creating beautiful songs that are the armor that protect her from the pain of her past. Now Trevor is back in her life and she’s feeling overwhelmed by the fierce need to be close to him, and the fear of getting her heart broken.

Will Trevor and Reya finally take the jump together and make their hearts whole again?

I was on cloud nine reading this book. I’ve been in love with Trevor since I first started reading this series and his story was as colorful and heartwarming as I knew it would be, perhaps even more. Reya was just the perfect heroine for him. She was the peanut butter to his jelly and their love story, the perfect treat for me. Reading Hearts On Air felt like having a million butterflies fluttering around my heart, giving me the biggest smile ever. Just perfect!

My Hearts On Air music playlist:
*The Night We Met by Lord Huron
*Unconditionally by Katy Perry
*Nervous by Gavin James
*It’s Gotta Be You by Isaiah
*Symphony by Clean Bandit

I nodded in an effort to convince myself it would be easy, a piece of cake, and yet still, I had that distinct, unsettling, dreadful feeling that despite our best efforts to make this work, the world was going to tear Trev and I apart.

I’m absolutely in love with L.H. Cosway’s writing! Her characters are always so unique and vibrant. I’ve only read a few of the books in this series but I can tell you that there hasn’t been one Heroine or Hero that I didn’t love. The Heroines have had a rough start in life and somehow have been left alone to face all of life’s challenges, but they persevere. Each Cross brother is charismatic in their own way and will steal your heart! Get ready to be dazzled by Trev and Reya’s love story!!

Trevor and Reya have been the best of friends since the day that they met. Although, Reya was a little more than disappointed that things never went any further as she was smitten with Trev from the moment she first laid eyes on him. Little did she know that Trev was harboring a crush on her as well. Reya is a singer/songwriter and Trev would show up to all of her performances. Whenever she spotted him in the audience she sensed something in his eyes that had her heart racing! One night Trev asks Reya to go out on an adventure with him – that they should do things they’ve never done before. On this night, feelings that the two bottled up for so long come to the surface and they share a passionate night together. Reya was hesitant to cross the line between friends and lovers with Trev because she feared she would end up with a broken heart which is what happened when Trev gets the role of a lifetime on a reality TV show. The show becomes a huge hit making Trev an overnight celebrity and Reya decides to break things off so that she isn’t holding him back from living his new and exciting life. 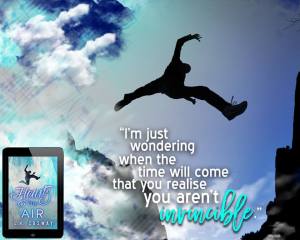 Fast forward to about two years later, present day, Trevor is back home for a visit and he’s looking to have Reya back in his life. They haven’t seen each other for nearly two years. While things have changed drastically for Trev, Reya’s been stuck in a holding pattern. Her feelings for Trev never truly dissipated but she tries as hard as she can to remain a bit aloof whenever he’s around. Reya’s plans to avoid Trev are thwarted when he helps her get a temporary job as the PA for his show. For three weeks she will be traveling across Europe with Trev and his fellow cast mates.

Throughout the story, we are taken from the past to present so we get to experience all of the butterflies when their relationship is just starting and then the heartbreak when it all falls apart. But their love for each other transcends time and distance, and even Trev’s behavioral disorder, ADHD. It is what caused him at times to be unavailable when Reya needed him the most. During their separation, Trev was going to counseling to learn how to manage his ADHD. He wants another chance with Reya and will go to great lengths to make that happen. 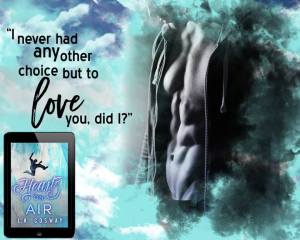 Trev is not the only one with issues in the relationship. Reya’s family chose to abandon her when she went through a traumatic experience and they all accused her of being a liar. She feels as though she’s never been anyone’s first priority and expects that the people closest to her will inevitably let her down, and when Trev isn’t there for her during a couple of rough patches it only convinces her that she’ll never come first in his life either. Reya let her insecurities rule her which led her to push away the one person who truly loved her the most, but working on the show with Trev might just give them their second chance at happiness.

Get ready to fall in love with the latest couple in the HEARTS series! HEARTS ON AIR is currently available and those of you who enjoy the friends-to-lovers/second chance romance tropes will definitely want to check this one out!