One promise.
One forever.

One look and I knew Cole was mine. My dark rebel in leather. My powerhouse of passion, devastating smiles, and impulsiveness.
When his job sends him overseas, he promises to return to me.
A promise that’s destroyed in the most irrevocable way.

Clean-cut and stern, Trace is everything Cole wasn’t.
At first, he’s a job that will rescue my dance company. But as he intrudes on my life, our hostile relationship evolves.
He knows I’m still in love with Cole, but his dedication is my undoing.

Then a catastrophic moment changes everything.

I love two men, and I can only have one.

-Dancing is the piece of myself I will never suppress or hide. “I love creating art through movement.”

-“I dance because I have to. Because it’s who I am- the artist, the athlete. It’s my outlet to let go, to just be.”

This is a story about love, loss, & second chances. One woman who is lucky enough to find a love greater than anything she could’ve ever imagined. Danni Angelo meets Cole Hartman & it’s love at first sight. It’s intense, electric and all consuming. They are inseparable for ten months & fall deeply, passionately in love. They get engaged & then his job sends him overseas. Danni waits for him, but he never returns. She’s absolutely shattered. An emotional, broken mess.

Two years later she’s still grieving & can’t seem to move on or forget what she lost. She hasn’t dated or been with a man in a long time, & is lonely. She craves intimacy & love but doesn’t want a meaningless one night stand. She knows what it feels like to be adored & wonders how she’ll ever settle for anything less. Nobody has made her feel that spark since Cole.

Danni is a dance instructor in St. Louis who struggles to get by. She unexpectedly meets a gorgeous man named Trace Savoy who owns one of the largest casinos in the Midwest. Trace offers her a job opportunity she can’t refuse. The only problem is he’s a rich, powerful, arrogant control freak. They clash like crazy & are volatile and explosive together. The sexual tension ignites & he awakens something within she thought was dead & buried. Her celibate libido. He’s the first man she’s felt drawn to since Cole. He’s triggered something inside her, & suddenly she craves him like her next breath. It’s been so long since she’s been this affected by a man. He’s Cole’s opposite in looks, but they share the same aggressive alpha male behavior she can’t get enough of.

Danni’s never met a more complicated, confusing man. He shows incredible restraint & gives mixed signals. She knows they share a strong connection, but still can’t figure how he feels about her. She never thought she could feel again, but Trace begins to give her a reason to take a chance. He helps her move past her broken heart & fall in love again.

-I want this man. Tonight. Right now. Have I lost my damn mind? Try as I may, I can’t rationalize my reaction to him.

-Jesus, this man is potent. All he has to do is stand there in his tailored suit and transmit displeasure like it’s foreplay.

-I affect him- my body, my art, my command of both. It gives me a sense of power over him.

-His gaze trails over me like a blistering fire that melts through my skin and sizzles in my blood. It’s the kind of look that brings two bodies into complete union.

I absolutely loved this story! We get chapters from the past & the present, so I fell hard for two men who are very different on the outside but share some similarities in personality. They are both alpha males to the extreme, & hot as hell! I repeat HOT AS HELL!!! One is all tatted up & rides a motorcycle & the other is a delicious suit wearing hottie with every hair in place. Both men were totally captivated by this stunning woman & would do anything to have her. This story was incredibly sexy & had me hooked from start to finish. This book is full of beautiful love, but it’s all tangled up in a web of lies that comes to a head by the end of the book & leaves you dying for more!

My past and my future. My first love and my second chance. Two hearts from two separate lives colliding helplessly, cruelly together.

Once I read the synopsis of ”The Tangled Lies” series, I knew I had to get my hands on these books! I was completely consumed by this story! Pam Godwin’s writing is incredible. The way she weaves this tale is simply masterful. This is one hell of a love triangle romance that held me captive from page one! Usually, I’ve chosen my favorite guy by the time that I get at least halfway through the story but the intricate character development had my heart torn between the two amazing but polar opposite men by the time I was almost to the end. And let me just add that the steam factor is sinfully decadent!! Danni Angelo met the love of her life one cold morning in front of her house when she volunteered to help out her elderly neighbor by having a talk with the man who drives by the neighborhood at an ungodly hour on his loud motorcycle. Danni and Cole feel an instant spark during that first meeting which results in a passionate love affair. In less than ten months they are engaged and planning on their forever. Cole is wild and oozing with alpha masculinity but his love for Danni is so tender and all consuming. And Danni is just as much in love with Cole as well. He completely owns her, body and soul. 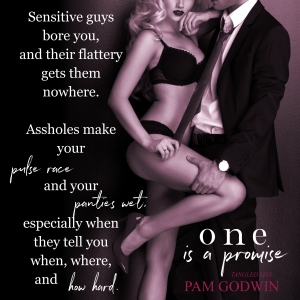 Ten months into their relationship, Cole’s job requires him to fly off to Afghanistan to work on a year-long project. It’s all very top secret and their ability to communicate will be limited but he promises Danni that when he returns, they will get married and he’ll quit his job so that he never has to leave her again. Danni’s world is completely devastated when Cole is killed during an accident on the job. For over two years Danni loses herself to her grief over Cole’s death. She ends up going on a blind date with one of her brother-in-law’s friends at the urging of her sister. It is during her disastrous blind date that she meets Trace Savoy, the devilishly sexy and beautiful man who is about to become her employer. Trace shows up at her house and informs her that he is the new owner of the club she performs at as a belly dancer. His plan is to relocate the club to his casino. The man is oozing with power and raw sex appeal. He’s 100% alpha male and has stirred up feelings within Danni that she thought she’d never experience again in her lifetime.

Trace and Danni play ”hot & cold/push & pull” head games for almost three-quarters of this story and it was beyond frustrating but also highly entertaining as well. All throughout the story, there are chapters that take us back to the past where we get to experience Danni and Cole’s love affair as well. The author makes sure that Cole never leaves Danni’s or the reader’s minds throughout the story and it only helped to make my heart feel further conflicted. It becomes so very hard to choose between Cole and Trace because they end up being pretty amazing in different ways.

Book one ends on one serious cliffhanger that completely blew my mind. I was expecting a shocking development at the end but was completely thrown off balance by how far the depths of betrayal went. I’m not even sure what to think anymore! My mind and heart are caught up in a tailspin!

ONE IS A PROMISE is currently available! This is an absolute MUST-READ!! What a captivating series so far!

Fool Me Once by Author Nikki Ash, a stand-alone, secret baby romance, is coming March 5th Image by Taylor Nicole Alexander Design by Juliana Cabrera Add FMO to your TBR: http://bit.ly/FMONA Preorder FMO now at a special preorder price: http://bit.ly/34vmQVp Order a signed copy on my website: www.authornikkiash.com/shop/ 🖤 Synopsis 🖤 I met Keegan when I was on the beach in Florida. He literally crashed into my world. I wasn’t looking for romance, but his two-dimpled charm made my heart go haywire. We both had one thing in common: we were here to escape our realities. One week. Just the two of us. Not a care in the world. I didn’t know it at the time, but that week would forever change my life. Four years later, and as fate would have it, Keegan and I are brought together again. It’s as if the universe is telling us this is our second chance. The more I get to know him, the harder I fall. Falling hopelessly in love is inevitable with a man like him. Only the joke’s on me, because the guy I’m falling for isn’t the man I thought he was. You know how the saying goes: Fool me once... I’ll be damned if I’m fooled again.