From New York Times bestselling author CD Reiss, a standalone romance about a nanny, a Hollywood star, and a love they never expected.

Hollywood bad boy Brad Sinclair always gets his way, whether it’s the role he wants or the bikini-clad model he has to have. But when a bombshell gets dropped in his lap in the form of a dimpled five-year-old from a forgotten relationship, he knows his life is about to change forever.

Cara DuMont isn’t exactly thrilled when she gets assigned to be the nanny for the latest box-office king. She has one rule: no celebrity fathers, especially single ones with devilish good looks and rock-hard abs.

But as soon as Cara meets Brad and his adorable little girl, she knows she’s in for a world of trouble. Because there’s something about the way Brad looks at her that makes her believe that some rules are meant to be broken…

He was as beautiful as ever, but starkly human. Flawed beyond belief. Emotional and broken. He needed me to fill his empty places and in letting me do that, he filled mine.

She had to know who I was. She had to see me because I’d opened myself to her. I hadn’t opened up to anyone, and I realized how much I needed her to see that. To know that she stood inside the open door of my heart. 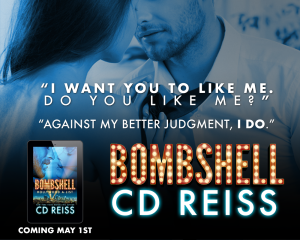 Fans of romances involving a single father are really going to enjoy this book and I’m positive that BOMBSHELL is going to be another huge hit for C.D. Reiss. The hero in this one is a drop dead gorgeous Hollywood A-List actor who can melt the panties off of any woman with just a wink and a dimpled grin. Brad Sinclair will have many a reader fanning themselves over his sexy filthy talking prowess and swooning over the tenderness he showers over his little five-year-old daughter, Nicole.

Brad Sinclair is one of the most sought-after Hollywood actors and he’s just recently been given the surprise of his life when he is told that he has a five-year-old daughter that he never even knew existed. If her mother hadn’t passed away, he never would have known that he was a father. Brad is in way over his head and so he is in search of a Nanny that can help take care of Nicole while he’s out filming movies.

Cara Dumont recently lost a job as a nanny for a couple of kids she really loved. There was absolutely nothing going on between Cara and her boss but for whatever reason, his fiancé felt threatened which ultimately led to her job’s termination. Cara ends up meeting Brad’s little girl during a highly upsetting situation and she seems to be the only person that has a calming effect on Nicole, and Brad becomes more than determined to hire Cara as his daughter’s Nanny. The only problem is that Cara’s friend was applying for that job and she actually has no desire whatsoever to work for a Hollywood celebrity. She’s seen how things can go wrong in those situations and never wants to end up on the pages of any gossip magazines, being labeled a “homewrecker” or a “whore”. But Brad Sinclair always gets his way and whatever he and his daughter wants, they surely get.

Cara agrees to stay on as a temporary Nanny. She knows she is in serious trouble when she can’t seem to control her naughty daydreams that all showcase her current boss, and she’s not the only one having impure thoughts. Brad is also wildly attracted to Cara as well, however, his bad boy behavior and reputation help to keep Cara’s defenses up. There’s also the fact that she takes her job as a Nanny very seriously and always puts the welfare and happiness of the child she is caring for over any kind of wants or desires that she may have for herself.

As Cara becomes more enmeshed in Brad’s life, lines are being crossed and soon they are giving into the white hot passion that has been building between them. C.D. Reiss delivers her signature sinfully decadent steam that her fans have come to love about her stories! I needed many a moment to cool myself off!!

BOMBSHELL is currently available. Be sure to one-click!