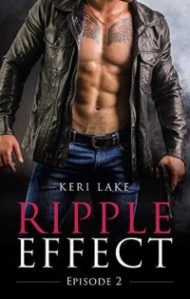 They call me RIP.
I’m a killer. A murderer. A psychopath.
In the eyes of the righteous, I’m a monster, born of sin and depravity.
I want to protect her, but I’m not a good man.
I want to love her, but I no longer feel.
She gets under my skin, though, and has awakened something inside of me.
Something I’d kill for.
I’m not her savior—not even close. In fact, I’m worse than the hell she’s already suffered.
I’m her vengeance. Tit for tat, as they say.
And if she’s not careful, I’ll be her ruin.

For months, I’ve watched him.
I’ve fantasized him as my savior, my lover. My ticket out of the hell I’ve lived in for the last six years.
I never dreamed he’d be my nightmare.
Had I known what he really is, I’d have never gotten in the car that night, but life is full of cause and effect.
And sometimes the choice on offer isn’t a choice at all.
It’s the result of something already in motion, and we’re merely left to survive the ripple effect.

In my mind’s eye, he’s beautifully savage. Taking what he wants with the sole purpose of feeding what he craves. And I want to give it to him. I want to feed his appetite for my ruin. I don’t know why, except that the surrender feels so promising.

This installment was twice as good as Episode One! I believe I have another author to add to my favorites list. For some reason I find myself falling for the truly f’d up heroes and Rip definitely had my heart racing in this latest book!!

At the end of book one, Dylan is caught red handed by Rip. She broke into his home and got into his safe. She desperately needed money in order to pay the fine to get her dog out of Animal Control’s headquarters. Rip is intrigued by Dylan. He wants to know how she even found him and got into his house, and why when there was so much money in his safe, did she only steal six thousand dollars. 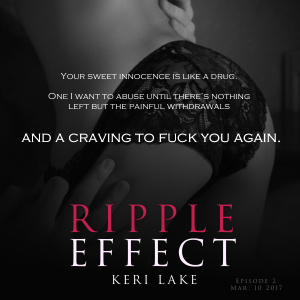 Dylan is addicted to Oxy and for what seems to be a week, she is coming in and out of consciousness. She doesn’t know what’s real or what’s a nightmare. She appears to be chained up in a basement and going through painful withdrawals. But then she wakes up in a warm shower with strong arms embracing her. Dylan thinks this is a dream but later on, when she finally wakes up in a strange bed, with an IV stuck in her arm, she’s not so sure anymore.

Rip is feeling an intense attraction to Dylan, and even though she is terrified of him, Dylan’s body and mind betray her by also having intense sexual reactions to his touch. She’s offered a deal to stay with him for two months, where she will let him do whatever he wants to her, sexually, and then she gets to walk away with twenty thousand dollars. What she doesn’t know is Rip has a really kinky and somewhat brutal sexual appetite. He can’t reach sexual gratification unless there is some pain mixed in with the pleasure. His playroom puts Christian Grey’s red room to shame!! I learned something new and I’m still kind of trying to figure out how one of his toys works!!

Dylan is still fighting with her addiction and also battles with her feelings for Rip. And Rip is finding it hard to focus on business when thoughts of the beautiful young girl, locked in his house, keeps running through his mind. He’s never felt this way for a woman and it’s not a complication he can afford to have in his life.

Will he let Dylan go before she becomes to mean too much to him? This series is far from the hearts and flowers romances, I usually gravitate towards, but I am completely addicted to it! Each episode ends leaving you wanting more and hoping that somehow these two damaged souls can find redemption from the bond that is forming between them.

THE RIPPLE EFFECT: EPISODE TWO is currently available! Make sure you one-click!

Dylan Marceaux is about to turn 18 & has been left to fend for herself most of her life. She’s been living on the streets of Chicago for a while now, broke and hungry. She gets tangled up with a psychopath and gets away only to then try to steal money from him to save her dog. When she wakes up in Rip’s basement chained to the wall & at his mercy, she’s in a bit of a situation. Nobody cares about her or knows where she is.

Ridley can’t believe after sparing Dylan’s life, this is how she repays him, by trying to rob him. He can’t let her go since she knows too much about him. He is paid to take people out & doesn’t ever feel empathy, but something about Dylan makes him want to protect her. He has a curiosity about her & love’s her spitfire, fearless attitude. He knows she must need money if she was desperate enough to steal from him & he can’t fight the intense attraction he has for her any longer. He offers her a deal she can’t pass up. She’s his for two months, & then they part ways. No expectations or personal ties, and she leaves with a lot of money.

-For a monster, he’s stunning.

-“Even the threat of pain can enhance arousal, did you know that? It’s a primitive response to fear. Your instinct is to run from danger. But your body? Your body is responding to my touch.”

-“Mercy. See, killing, fucking, it doesn’t matter. The moment you surrender to it is so goddamn sweet it almost hurts.”

-“I’m curious to know what you sound like when you scream- just haven’t decided if it’s pain or pleasure I want to hear most.” 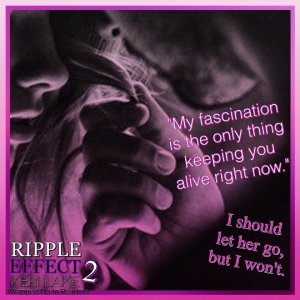 Dylan never knew where she’d sleep at night & was glad to at least now have a roof over her head. The longer she is with Rip, the more she begins to want his attention & crave him. She becomes addicted to the way he touches her & the lines between fear and arousal become blurred.

Rip can’t believe how Dylan consumes his thoughts so easily. Darkness used to take up all the space in his mind & now he can’t concentrate. Dylan’s become his obsession. She’s awakened something inside him he thought was dead and buried. Will they be able to walk away from one another when their time is up?

I really enjoyed this book. Each one is even better than the last. In this book, we get more emotions, lots of sexy, & more of their past. I can’t wait for the next installment in this series! I’m hooked on Rip!