“Lean back on the table and spread your legs for me…”

Being a doctor in New York City has never been easy. Especially for someone like me who has a private practice and an incompetent staff who insists on leaving me to fill in for them.

Over the past six months, I’ve performed one too many pap smears, three too many “breast exams,” and scrubbed in on several reconstructive surgeries. (This would be acceptable if I was still interested in general medicine, but I’m not. I’m supposed to be a goddamn therapist…)

When my team finally came to their senses and decided to bring someone more competent into the practice last month, I was actually elated.

Until I realized that our new “doctor” was none other than the woman I was supposed to meet over dinner two weeks ago. The same woman who stood me up with nothing more than an “I can’t meet you anymore, sorry,” after we agreed to move our online talks into reality.

I haven’t forgotten any of the filthy fantasies she told me about, and I never deleted our dirty messages. And if she thinks that I’m going to act like a “professional” and pretend like that shit never happened, she has another thing coming…

Doctor Garret Ashton will make every part of your body tingle and he will keep you happily occupied and wishing for more.

The Doctor will see you know… 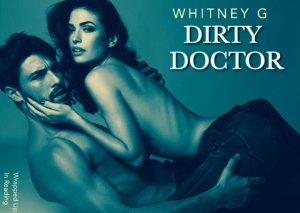 Doctor Natalie Madison has been studying diligently and working hard for the past few years trying to be the best resident doctor there is. She’s currently working at her dream practice facility and it’s just about the only satisfaction she currently has in her life. Natalie’s lack of romantic life has her feeling rather desperate for the touch of a man, so she’s joined an online dating site in the hopes of finding love or sex, or both.

She’s been on a few disaster dates and the desperation is getting to her, especially now after she’s learned she’s being fired and transferred into another medical practice.

When she starts her new job she realizes that her new boss is the naughty doctor she’s been talking to online for the past few months. Dr. Ashton is extremely handsome and he’s also the owner and top doctor at the number one doctor’s practice in New York City.

Working together will be both pleasure and pain. Will these two doctors be able to keep things professional and honor the non-fraternization rule or will they simply give into their desires?

Dirty Doctor is a novella that you’ll wish was actually a thousand page novel. Soooooo good! Whitney G is hitting it out of the park with these amazing novellas that are the perfect quick reads, that I can see myself reading over and over. I WANT MORE!!!

Garrett Ashton is a gorgeous doctor in New York who owns a private practice called Park Avenue Wellness Group. His practice is his family legacy & is the #1 private practice in the state. As the owner, you’d think he could do what he wants, but thanks to his incompetent staff, he’s constantly having to fill in for them doing breast exams, pap smears, etc. He just wants to be a therapist & not fool with general medicine anymore.

Natalie Madison couldn’t imagine working anywhere but the hospital she interned at, so when they tell her she’s being transferred to a private practice for her residency she’s devastated. She always thought she’d stay on at the hospital and work with her mentor.

Garrett’s team decides to bring on a new Dr. for their residency program. He doesn’t want to be anyone’s babysitter but hopes the new resident will lighten up his workload. When he learns his new employee is the woman he’s been chatting with on the dating app the New York Minute things get complicated since she recently stood him up. He had dinner plans with his mystery woman a couple weeks ago, & she abruptly canceled on him and ruined a perfectly good friendship. Now that he knows who she really is he forgets about being professional. He can’t pretend he doesn’t know all her dirtiest fantasies.

Garrett is pissed Natalie has been right under his nose this whole time. She’s gorgeous & becoming a temptation he can no longer resist. Once they act on their intense attraction all bets are off. They indulge in one another often & can’t get enough. This was a super hot, sexy novella that is fantastic. Dr. Ashton is deliciously sinful. Really enjoyed this one! 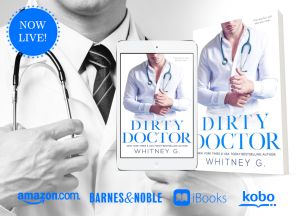 I love Whitney G! Ever since I read the Reasonable Doubt series, she has remained one of my favorite authors. She’s the queen of creating the sexiest dirty talking book boyfriends. Andrew Hamilton will always be one of my favorite dirty talkers. This Steamy Coffee Collection series is meant to be pure unadulterated naughty entertainment and so far I have to admit that I have loved every minute of it. Now I have to admit this and the previous book seems to be very similar to her “Reasonable Doubt” series. There are only slight differences but heck this formula works and I wouldn’t mind if she wrote ten more of these!

Natalie and Garrett have been having a flirtatious online friendship for several months. Neither knows each other’s true identity or name. They go by the nicknames of “D-Doctor” and “Jerseygirl7”. The highlight of their days are the sexy messages they exchange. Natalie has told D-Doctor about all of her sexual fantasies and they’ve discussed all of her recent dating disasters. D-Doctor has quite the filthy mouth and has propositioned Natalie on more than one occasion but she’s always managed to dodge his requests to meet in person until they make a bet that if her latest date turns out to be another disappointment, then she will have to go on a real date with him. Of course, she loses the bet and they make plans for a Friday night date at a very exclusive restaurant in NYC.

Garrett Ashton is a very successful doctor who is part owner of NYC’s #1 Private Practice group. He spends most of his time in the office not only doing his job but also filling in for some of his unreliable partners. He doesn’t have time for relationships nor does he have any desire to be in one, but a certain woman he’s been basically sexting online has been occupying his thoughts more than he cares to admit. No one other than his online gal pal has really seemed tempting to him until he meets the new Resident that his colleagues hired to work at their practice.

As luck would have it, the Resident is Natalie and at first, neither of them realize who the other is since they’ve never revealed what they look like. Eventually, they both discover the truth and it becomes a battle of wills for the two to work in the same office day in and day out, and not rip each other’s clothes off.

When they can no longer hold on to self-control, the story gets deliciously naughty and boy did I likey a lot!! I am so glad I finally got around to reading this one! This series is purely for enjoyment purposes only and great to pass the time on a lazy Sunday afternoon!