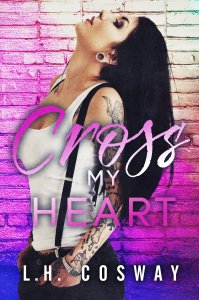 Iris Garrigan has nothing.

Well, that’s not entirely true. She has her trusty Doc Martin boots. She has her Bowie obsession. And she has the stray cat that sneaks into her bed and keeps her company at night – it’s a quid pro quo relationship. The cat gets a warm body and she gets something alive beside her when she would otherwise be alone.
She also has a job. Sure, washing dishes hardly has her rolling in dough, but with no permanent abode, it’s the best she can do. She knows her new boss only lets her work in his restaurant out of pity, but she isn’t above cashing in on a little human compassion if it means she can survive to live another day.

Everything is going fine until Liam Cross starts to take notice of her, poking his newly minted police badge where it doesn’t belong. And if he doesn’t quit soon her not so legal living situation could find her in hot waters. Little does she know, Liam isn’t just being nosy, he’s trying to help. Iris has no idea that he’s been watching her for months, and that he’s completely enamored with her strange and peculiar ways.

When Liam discovers her secret Iris has two options: stay and face the music or run for the hills.

***Cross My Heart is a contemporary romance novella and tells the story of the youngest Cross brother, Liam Cross.***

Short, and simple, but vibrant and full of unstoppable romance; L.H COSWAY style. Cross My Heart is one of those books that was made to conquer your heart, and you won’t even have a choice in the matter. By the time you are done reading it, your heart will feel happy and your soul will sing and dance to the tunes of David Bowie. I simply CAN’T GET ENOUGH of the Cross brothers. 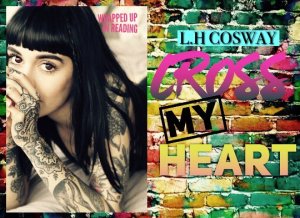 Iris works as a dishwasher at The Grub Hut, which is Lee Cross’s restaurant. She works hard to try to save enough money for a deposit to get her own apartment, and finally be able to stop living on the streets. Iris carries a lot of sadness, her mum died of a drug overdose when she was young, and Iris was forced into the foster care system until she reached eighteen, and ever since then she’s has had no place to live. Her best and only friend died in a gang related accident leaving Iris all alone in this world. But don’t think of Iris as a victim, she’s not! This girl is a fighter and a hard worker who doesn’t take crap from nobody.

Iris keeps to herself, she doesn’t socialize with anybody at work; her only friends are a stray cat that keeps following her everywhere, and the imaginary friend in the form of the spirit of David Bowie. 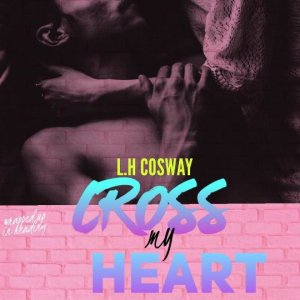 Liam Cross changed his life around completely, he went from being a car thief to a police officer. Liam has been watching Iris closely, ever since she started working at his brother’ restaurant. He feels a pull towards her, Iris, the girl with deep sadness in her eyes and colorful skin.

At first, Liam offers Iris a friendship but he is very attracted to her and it won’t be long before these two surrender to the explosive attraction that takes over all their thoughts during the day and all their dreams at night.

I loved this book, just like any other book that I’ve ever read by this author. She has a magic pen that creates amazing characters that will stay in our hearts forever. Cross My Heart being a novella, it felt like eating a small piece of your favorite chocolate, and I WANTED MORE!!!!!
In other words, I wanted this book to go on forever. What I’ll do is, I’ll re-read every single book in this series again, and hopefully that will quench my thirst for the Cross brothers.

If you haven’t tried this series, please do, it’s a TOTAL WINNER OF THE HEART.

I have only read a few LH Cosway books but I am definitely a HUGE fan of hers! My goal this year is to try to ease up on my ARC requests and make some time to read all of this author’s previous books!! CROSS MY HEART was simply FABULOUS!! My only complaint was that it was written as a novella instead of a full-length standalone. I loved the Hero and Heroine. It would have been awesome if we got to spend more time with them but that being said, the story was still highly entertaining!!

Iris is a twenty-year-old young woman who has had a rough start in life. Her drug addict mom died when she was fourteen which resulted in Iris ending up in foster care. As soon as she turned eighteen she was no longer a ward of the state and she was left to fend for herself. Currently, she works as a dishwasher for Lee Cross at his restaurant, and she’s trying to save up enough money for a down payment on an apartment. The poor girl is homeless and only has some clothes and an old sleeping bag as her worldly possessions. She sleeps in an abandoned building and lives off of bread and peanut butter. Her only two friends are a little stray cat that sleeps with her at night and her imaginary friend who is the deceased David Bowie. I loved Iris completely!! Her imaginary conversations with Bowie were one of my favorite aspects of this story! Iris’ determination to not let her hardships destroy her also made me admire her immensely. 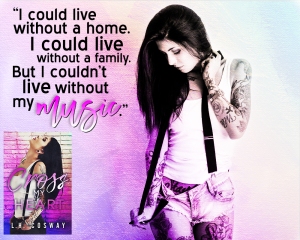 Liam Cross is Lee’s younger brother who, in his youth, was a car thief, but now he’s turned his life around and he became a police officer. Since the day Iris started working in his brother’s restaurant, he has been intrigued by the beautiful girl with the sad eyes. Something about her has him feeling a fierce need to protect her. Iris has caught him staring at her on many occasions and on one hand, it freaks her out but also at the same time it excites her because she thinks Liam is just about the most beautiful man she’s ever seen.

After Iris ends up nearly freezing to death one night when she loses her makeshift living quarters in an abandoned building, Lee offers her a room to rent in his house. His brother Stu has moved out and he offers his old room to Iris for a very minimal fee. Things heat up pretty quickly between Iris and Liam once they start living underneath the same roof. Although there is definitely the “insta-love” factor going on here, I still enjoyed this novella so much!! I hope that maybe LH might write another installment for this lovable couple.