From New York Times and USA Today bestselling author Katy Evans comes a brand new contemporary romance. WOMANIZER is a full standalone, and no other books in the series need to be read.

We were just two strangers. Facing a forbidden attraction, a chemical connection. Neither of us expected or wanted it to amount to more.
But I had never been drawn to a guy the way I was drawn to this one: my brother’s best friend, and CEO of the company where I interned.
Even knowing I should stay away, I proved to be too human, after all.
The chemistry was amazing.
The laughs were incredible.
I opened up to him in more ways than I’d opened up to anyone before.
But sex was as far as I’d go.
Just sex because he was too irresistible.
Just sex because I wouldn’t be falling for him.
Just sex because I’d leave in three months, and I’d like for my brother not to kill me, and for nobody to find out he was my wicked little secret.
He wasn’t the One.
He was just a womanizer.
But for a time, he would be mine.

Olivia Roth is a beautiful 22 yr. old woman from Texas that is about to leave home & be on her own for the first time. She’s starting her first official job, and is excited to be an independent woman. Her brother Tahoe landed her an internship at one of the biggest Fortune 500 companies in Chicago called Carma Inc. it’s one of the toughest raiding firms in the country, and the CEO is her brother’s best friend Callan Carmichael.

Callan Carmichael is a 28 yr. old hot, smart, ruthless, sexy, unattainable billionaire bachelor. He’s known for being a womanizer & a shameless player, and is the last of his friends that’s still single.

Callan & Livvy meet & sparks fly. They share an instant connection & chemistry , and just click. Livvy knows as her brother’s best friend Callan is forbidden to her, but she’s still drawn to him, & finds him absolutely irresistible. Seeing him becomes the highlight of her day.

Callan knows he should stay away from Livvy. He’s her boss & she’s his best friends little sister, but he can’t stay away. His want for her becomes unbearable & soon they are acting on their intense attraction, & seeing each other in secret.

Livvy planned to do her internship for three months & go back home to Texas. She never planned on meeting a man who made her feel wanted and beautiful. A man who gave her laughter & the best sex of her life. 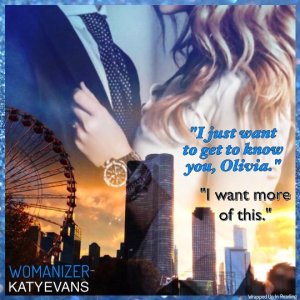 -This is dangerous and definitely not good for me- and I still want it. I want more of it, of Callan Bad Boy Carmichael.

-I have no shame when it comes to you. No rules I won’t break for you. Something about you gets to me like nothing ever has.

-“Your irresistible. I can’t keep my eyes off you, my hands off you.”

The more time Livvy spends with Callan, the more she craves him & can’t resist him. Her plan for just sex turns into more & she fears she won’t get out of this without a broken heart. He shows hers tenderness others don’t see, pushes & challenges her to be her best, makes her feel alive and leaves her breathless.

This man who doesn’t do commitments or invest himself emotionally is suddenly finding himself wanting more with a woman. He loves spending time with Livvy & can’t get enough of her. He’s totally addicted to everything Livvy & can’t imagine her not being in his life.

This book was amazing. It will definitely be in my top 5 list for 2016. This story was everything I love about reading. I adored Callan Carmichael and couldn’t put this book down. I love this series so much & highly recommend Womanizer!

Author Katy Evans is the creator of some of the hottest and my most favorite fictional boyfriends, and with Womanizer she really takes the cake; sexy Callan Carmichael is a hero impossible to ever forget . This sexy CEO will be the star of my dreams for many nights…

Tired of never being taken seriously Olivia asks her brother Tahoe, for help landing an internship. She’s lived under the shadow of her brother’s success, but now she wants to achieve her own goals in life, but it’s not easy for a young woman, as the business world is predominantly male.

Olivia gets an internship in one of Chicago’s most important business firms. True, it is owned by her brother’s best friend, notorious womanizer, Callan Carmichael, but she’s never met the man and she’s totally motivated to thrive and succeed in her new job and make her brother and family proud.

After a hard first day, Olivia goes into the building’s terrace to clear her mind from all the day’s craziness when she meets a sexy stranger, and they end up sharing a cigarette together. After that first drag and one look into his eyes, Olivia was addicted. For the next following days, she finds herself at the same spot craving the stranger’s company paired with the nicotine hit. 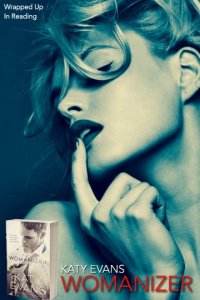 Olivia is doing amazing at her new job but the stress of it is taking a toll on her, so what better way to relieve some of the pressure, than to spend one night in bed with her favorite stranger? What happens when she wakes up from the best sex of her life and learns that she actually just slept with your boss ‘AKA’ brother’s best friend?

Olivia and Callan are addicted to one another, but they know that their relationship comes with hard terms, and an expiration date. Read this amazing story and find out, if their love becomes a forever type of love, or just a memory of a hot forbidden romance.

His eyes make me lose track of time. Everything about him drives me crazy…his smell, his touch, his voice.

Leave it to Katy Evans to create yet another irresistible Billionaire Playboy book boyfriend that had my heart racing!! I absolutely loved Womanizer so much that once I had the time to sit down and enjoy it, the hours flew by in the blink of an eye and before I knew it, the story was over. What made this book so incredibly addictive for me was the hero, Callan Carmichael. We met him in the previous books but never did I truly appreciate how incredibly sexy this man could be. He sure did give Malcolm Saint a run for his money. Although, I must admit Malcolm is still my favorite in this series by just a tiny millimeter!! This was one hell of a steamy take on the ”romance with the big brother’s best friend”trope!! Get ready to have your panties nearly obliterated by the scorching hot steam that generates between Callan and Livvy.

Olivia Roth lands a highly coveted summer internship at Callan Carmichael’s corporation with the help of her big brother, Tahoe. For the next three months, she will be living in the heart of Chicago and gaining invaluable experience. Her plan is to learn as much as possible and then when she goes back home to Austin, Texas, she will eventually open up her own business which will specialize in reviving companies that are in danger of going out of business. By the time she turns twenty-eight she will then be ready for marriage. She finds herself feeling a bit lonely during her first few days in Chicago until one afternoon she ends up on the company’s terrace and meets “Hot Smoker Guy”. This guy is the most beautiful man Livvy has ever laid her eyes upon and for some reason she thinks he works in the mailroom. For almost a week she finds herself going out to that terrace around the same time every afternoon where she shares a cigarette and highly engaging conversations with the “Hottie” from the mailroom. One night while at a club the two run into each other and Livvy uncharacteristically invites him back to her apartment where the two share one hell of an explosive night in bed. Unfortunately, they’re in for a rude awakening when Tahoe calls Callan’s cell phone the next morning and they then realize who they just spent the night with.

Livvy ends up trying to avoid Callan, which I just thought was impossible because he’s not a man that a woman could forget that easy and boy can he lay on the charm. It seems to take a huge amount of effort on Callan’s part to break through Livvy’s walls that she puts up to protect herself. This lucky lady manages to totally captivate the once notorious womanizer of Chicago and instead of taking what he is offering she tries to blindly stick to her idiotic life plan. I did find Livvy to be a bit delusional and naïve at times, but Callan had me seeing so many stars in my eyes that I was able to overlook some of the irritating qualities of the heroine. There is no denying how amazing the chemistry was between Callan and Livvy. I was easily swept off my feet by this story!!

WOMANIZER is currently available. If you like romances with Billionaire Playboys then you definitely need to one click this one asap!!