”I’m living in the moment and all I see is you. I’m not going to be able to stop until I have more.” 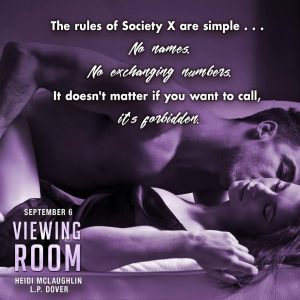 VIEWING ROOM is the second installment in the Society Xseries and can be read as a standalone. The story was packed with some incredible steam and suspense that helped to hold my interest till the very end.

Kennedy Vaughn is a successful lawyer who co-owns a law firm. She has recently gone through a divorce and her friends from work are taking her out for a night filled with sinful debauchery at the very well known and high end sex club, Society X. While in the club’s lounge one of the gorgeous male strippers catches her eye and he is making it clear that he likes what he sees as well. As fate would have it, she ends up getting treated to a striptease and lap dance in the viewing room and the guy who had her heating up inside the lounge, happens to be the stripper. Kennedy gets quite the show and things get even hotter later on that evening.

Hunter Miles has been working at Society X for a couple of years in order to pay for law school, but he’s always enjoyed the no strings attached sex that is readily available to him at the club. One look at Kennedy changes everything for him. As they spend more time together, Hunter’s feelings run deep rather quickly. But Kennedy’s recent divorce and the fact that she is not thrilled with Hunter’s job at Society X has her reluctant to jump into anything serious with him.

The two have major chemistry in the physical aspect of their relationship but things get even more complicated when Hunter ends up getting an internship at Kennedy’s firm. While feelings start to intensify between them, they also have to work hard at keeping things low key in the office.

Things get intense when one of Kennedy’s cases requires the two of them to do some undercover work at Society X. The case turns quite dangerous and lives are threatened. 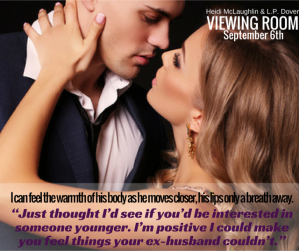 If you’re looking for a story packed with action and intense steam, then look no further. This might be just what you are looking for.