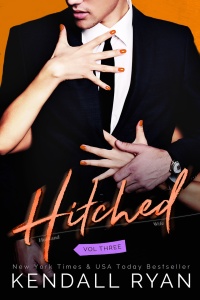 SYNOPSIS:
On the heels of her smash hit and New York Times bestselling SCREWED series, Kendall Ryan brings you HITCHED, a romantic comedy that delivers heart and heat. A NYC playboy turned business mogul has ninety days to win over the woman he’s always desired in order to save his father’s company. One tiny problem: She hates his guts. This is the third and final volume in the story.

In the conclusion of HITCHED we are left wondering if Olivia will ever be able to forgive Noah for his momentary lapse in judgement, and can she give their marriage another chance? Olivia ran off when she caught Noah trying to do something really underhanded just when she was starting to believe that they had a chance at true love. When he tells her about the “heir” clause that’s in the contract they both signed to gain ownership of their fathers’ company, it is just too much for her to take in and she escapes in order to gather her thoughts and to think of her next move.

Noah, in the meantime, is feeling devastated and remorseful. He wasn’t going to go through with what Olivia saw and wants desperately to fix their relationship. Noah realizes that the marriage means more to him than keeping their fathers’ company and so he decides he’s taking matters into his own hands and getting Olivia back. He does end up finding her and then they go to her father and their family lawyer to find out what possessed them to put the heir clause in the contract. Now this is the part, I wish had been cut out of the story. Olivia’s father explains how the two of them always seemed to gravitate towards each other ever since they were infants and mentions specific moments in their lives that neither seems to remember until this conversation. How is it that they have been so close for countless years and yet when it comes to remembering pivotal moments from their youth, they both seem to be suffering from dementia???

Overall, I did love Noah and thought he was a sexy as hell book boyfriend, but I didn’t ever really warm up to Olivia. I understood why she was so upset with Noah’s actions but I also didn’t understand why he was so crazy in love with her. He definitely deserved a better partner.

If you’re looking for a short and sexy series with a swoon-worthy hero, the HITCHED series is sure to satisfy your appetite.