I found Killian drunk and sprawled out on my lawn like some lost prince. With the face of a god and the arrogance to match, the pest won’t leave. Sexy, charming, and just a little bit dirty, he’s slowly wearing me down, making me crave more.

He could be mine if I dare to claim him. Problem is, the world thinks he’s theirs. How do you keep an idol when everyone is intent on taking him away?

As lead singer for the biggest rock band in the world, I lived a life of dreams. It all fell apart with one fateful decision. Now everything is in shambles.

Until Liberty. She’s grouchy, a recluse —and kind of cute. Scratch that. When I get my hands on her, she is scorching hot and more addictive than all the fans who’ve screamed my name.

The world is clamoring for me to get back on stage, but I’m not willing to leave her. I’ve got to find a way to coax the hermit from her shell and keep her with me. Because, with Libby, everything has changed. Everything.

Music can be your friend when you have none, your lover when you’re needy. Your rage, your sorrow, your joy, your pain. Your voice when you’ve lost your own. To be a part of that, to be the soundtrack of someone’s life, is a beautiful thing. 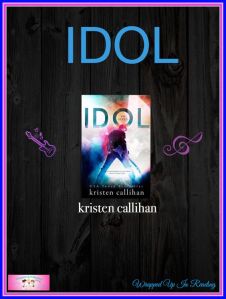 It has been a while since I’ve read a Rock Star romance and all I can say is that I am left wanting to read more of this genre. I’ve read some that didn’t quite hit the mark and then others that just blew me away, and I would definitely place IDOL in the ”Blown Away” category. I have been a big fan of Kristen Callihan since reading her very popular Game On series and just knew I was in for a treat with this one. I’m beginning to think that this woman can do no wrong!!! I’m HOOKED on this series and I need the next book like YESTERDAY!!

Liberty Bell is a young woman who lives the life of a recluse on a tiny island off the Outer Banks in North Carolina. She lost both of her parents in a car accident over a year ago and has spent every day since on the family farm she inherited. Liberty has a job that allows her to work from home and she has very little contact with the outside world and prefers it that way. Something life changing is about to crash into Libby’s life in the form of a six foot tall Rock God named Killian James.

Killian is the lead singer & guitarist of the biggest rock group in the industry, called Kill John. The group has been on a sabbatical for the past year after tragedy hits too close to home for them. In a drunken haze, while riding his motorcycle, Killian ends up crashing into Libby’s front yard fence and passes out on her lawn, covered in his own vomit. He definitely does not make a good first impression with Libby. She actually doesn’t even recognize him and gives him her little spitfire attitude for damaging her property and for riding his motorcycle while intoxicated. She does eventually take pity on him and nurses him back to health from his hangover. They soon find out, much to Libby’s dismay, that Killian is her new neighbor. He rented the vacant house next door in order to unwind and escape all the drama and paparazzi. The guys in the band are trying to write material and get back together but Killian has lost his love for the music. Libby will actually be the key to bringing the music back into Killian’s heart.

As they spend more time together Killian and Libby realize that their feelings for each other run deeper than they ever thought possible, and when Killian discovers Libby’s musical talent it sparks his passion for music again. They spend a short time living in their beautiful bubble away from the outside world but soon enough Killian will be forced to leave their secluded oasis and head back to the recording studio with his band. He wants Libby to come with him and perform on stage a few of the songs they wrote together, but her crippling fear of performing in front of an audience and her hermit tendencies force Killian to begrudgingly leave her behind. When the distance between them becomes impossible to bear, Killian does succeed in getting Libby to leave her cocoon and fly off to NYC to be with him again. He even gets her to overcome her fear of performing.

Will the limelight and friction with some of the members of the band create a rift between Killian and Libby? Or will their secrecy regarding their relationship and her rise to fame threaten to break the couple apart?

This was one seriously addictive and refreshing spin on the Rock Star romance genre. I loved that the Heroine was just as gifted a musician as the Hero was and that their love for each other was so selfless that they would sacrifice anything for the sake of each other’s music career. But there was a time or two when I wanted to slap the both of them for being so completely dense!!

This is just the first in the VIP series by Kristen Callihan and you would think that the next installment would be about another band member but it isn’t and I am so thrilled!! Next up we will be getting the band manager’s story in MANAGED!!! He is described as the most beautiful man, definitely better looking than anyone in the band and a doppelganger to the one and only man that owns my heart completely, DAVID GANDY!!!!!! ROLL ON BOOK TWO!!!!

IDOL is available now! Be sure to one-click!!
Amazon: http://amzn.to/1TWfxJV
iBooks: http://apple.co/1NMnNj8