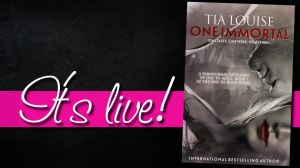 Check out this Halloween Treat from Tia Louise!

A STANDALONE PARANORMAL ROMANCE, based on ONE TO HOLD, Book #1 in the One to Hold series.

Listen to the Spotify playlist for ONE IMMORTAL: http://bit.ly/1MpcWd1 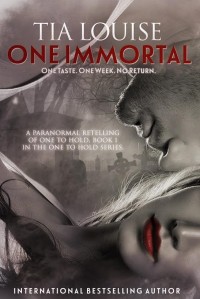 Derek Alexander left the military intending to become a private investigator, but with two powerful shifters as partners and an immunity to vampire glamour, he instead rose to the top in paranormal justice.

At a bar on Bourbon Street, Derek and Melissa cross paths, and their sexual chemistry is off the charts. Acting on their feelings, they are pulled deeper into an affair, but Melissa is hiding, hoping to escape her cruel maker.

It doesn’t take long before the shifters uncover her secret. Still, Derek is determined to confront the Old One and reclaim her mortality—even at the risk of losing his.

A STANDALONE PARANORMAL ROMANCE with an HEA based on characters from the One to Hold series. Contains voluptuous vampires, alluring alpha military heroes, scorching-hot shifters, beguiling witches, and panty-melting sexy times. Keep the fans nearby… Readers 18 and older only, please. 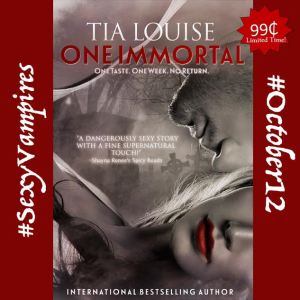 (A paranormal retelling of the Derek & Melissa story)

Derek clears his throat, and glances down. “You told them?”

“Told us what?” Patrick looks up from where he and Elaine are sharing a private tête-à-tête consisting of smiles and soft laughter.

“My friend got a little hungry last night.” Elaine gives him a wink, but his expression turns fierce. If my friend weren’t blocking him, he’d be on his feet grabbing me.

Derek extends a strong arm. “Take it easy. It doesn’t concern you.”

“Fucking concerns me if you end up dead and drained.”

I’m down the short flight of stairs, out on the flagstone sidewalk, when Derek catches me, cornering me between a white stucco column and a curtained window. His large body shields me from the street traffic.

“Where are you going?” A smile is in his voice, but I’m on the verge of tears.

“He’s right. I can’t risk your life like this.”

Holding his arms, I can’t stop a shiver. “If anything happened to you. If I couldn’t stop—”

“You will. You controlled it last night. You’ll control it again.”

Shaking my head, my fingers tighten on his biceps. “You have no idea how hard it is to control.” His nearness, his breath against my skin sends desire racing to my core. “I can barely control it now.”

His head lowers, his breath a warm whisper at my cheek. “What are you feeling right now?”

Lifting my chin, I take a deep inhale of his masculine scent. My nose just touches his collarbone, following the line of his neck higher. My insides clench, and I feel his muscles respond to my nearness, beckoning me on. His pulse is just beneath his skin. A whispered moan exhales through my lips as they part, allowing me to touch him with my tongue.

With a hiss, I realize my fangs are out. I’m on the street, in the middle of a mercifully overcast day, on the edge of biting him again. My hand flies to cover my mouth, and I see desire burning in his navy eyes.

“Oh, god, Derek.” I can barely speak between my changed features and my hand.

He shocks me when he only grins. “Glad I’m not the only one who can’t hide how attracted I am to you.” A shift of his hips, and I feel the erection nudging my thigh.

It’s exactly what I needed, because a little laugh chokes out with my frightened tears. He pulls my face to his chest while we both attempt to regain control.

“Deep breaths, my love. I’m not going anywhere, and you’re not going to hurt me.” 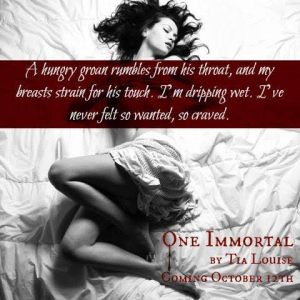 Get ONE TO HOLD for FREE: 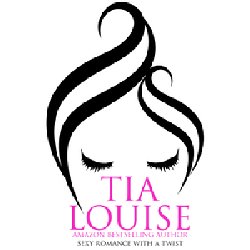 Tia Louise is the Amazon and International Bestselling author of the ONE TO HOLD series.

From “Readers’ Choice” nominations, to picking up USA Today “Happily Ever After” nods, to winning a 2014 “Lady Boner Award” (LOL!), nothing makes her happier than communicating with fans and weaving new tales into the Alexander-Knight world of stories.

A former journalist, Louise lives in the center of the USA with her lovely family and one grumpy cat. There, she dreams up stories she hopes are engaging, hot, and sexy, and that cause readers rethink common public locations…

Grand Prize:  Signed Set of the ENTIRE One to Hold Series

Signed Copy of One Immortal