Title: Drop Dead Dirty
A Dirty Gorgeous Series Standalone
Author: Jade West
Genre: Erotic Romance
Release Date: June 12, 2019
Blurb
Oliver Kent isn’t just drop dead gorgeous…
He’s drop dead dirty too.
I haven’t seen him in a decade. Ten whole years since Oliver
Kent broke my heart and we said goodbye to our teenage dreams forever.
They say he’s a crazy successful businessman now, living
wild in London with a huge bank balance.
And me? Well, I’m still here living the same old small-town
life, pretty sure I’ll never see him again.
Until rumour has it that he’s going to be at our high school
reunion…
How the damn hell is a girl supposed to cope with the Oliver
Kent effect all over again?
It’s a whole fresh round of want. Filthy, dirty want for the
boy who drove me wild with his filthy, dirty fantasies. So many memories aching
for more.
Just as well life sometimes gives out second chances, isn’t
it?
One thing’s for sure, I’ll be jumping in to take mine.
ADD TO GOODREADS

Jade has
increasingly little to say about herself as time goes on, other than the fact
she is an author, but she’s plenty happy with this. Living in imaginary
realities and having a legitimate excuse for it is really all she’s ever
wanted.
Jade is as dirty as you’d expect from her novels, and talking smut makes her
smile.
Author Links
FACEBOOK
TWITTER
WEBSITE
NEWSLETTER
BOOKBUB 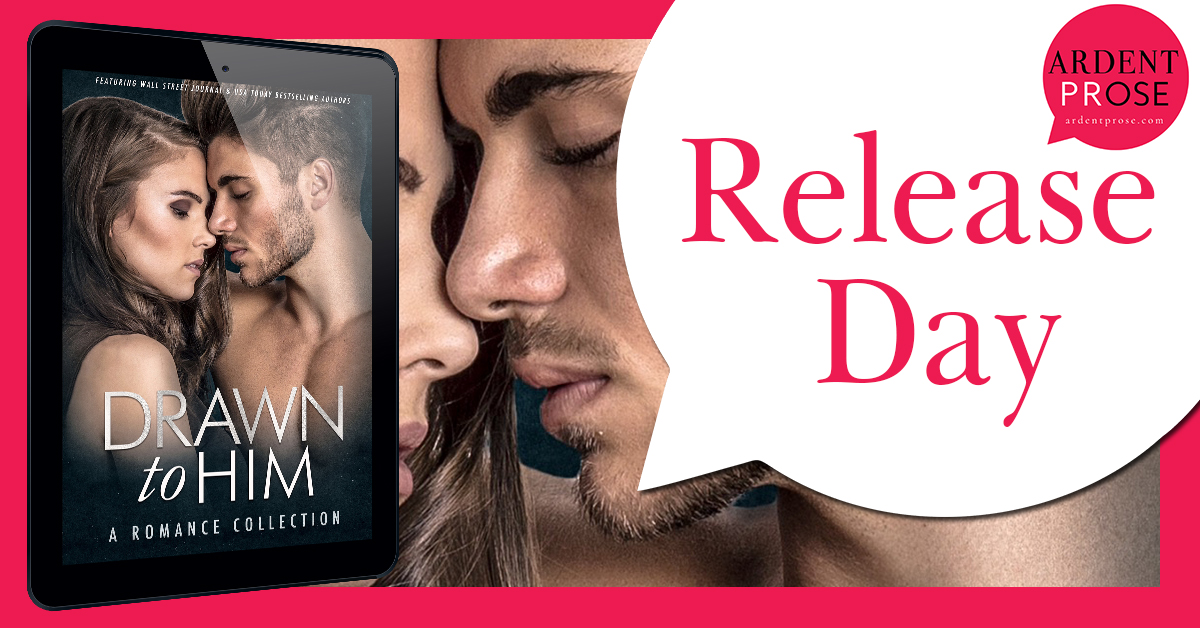 Drawn to Him website
http://www.drawntohimcollection.com
WRAPPED UP IN READING”s REVIEW OF DRAWN TO HIM 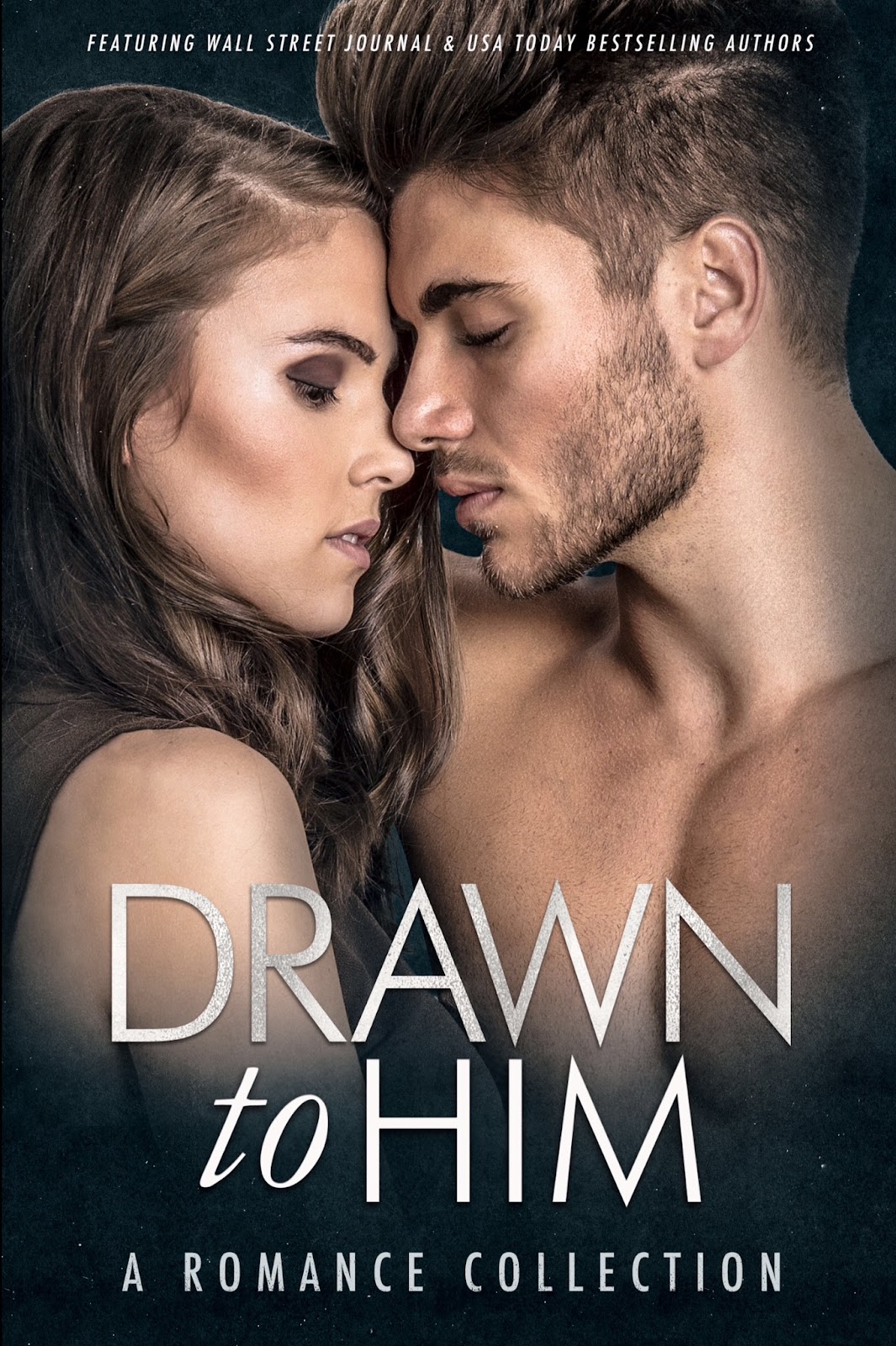 There are some men who make you helpless.You know the kind.  They steal the breath from your lungs and make your heart beat a little faster with a single look.  You can’t stop staring, but the moment they pin those gorgeous eyes on you, you’re done for.The kind that’s too hard to resist.This is a collection of men just like that. Handsome, confident and all for you.These are the other authors involved with this collection, M. Never, L.J. Shen, K. Webster, Jade West, Isabella Starling, A. Zavarelli and K.L Kreig.

Excerpt from Infatuation by Willow Winters
“You’re very handsome, Mr. Kulls.”  I finally give in to a bit of my desire, and pick up the glass of wine, holding on to it for support in this decision. His grin widens and he leans forward just slightly to say, “Alec, Lila.  My name is Alec to you.”  He pauses for a moment, then flashes me a smirk and adds, “Unless of course you’d like to scream ‘Mr. Kulls’ in bed?”My face heats instantly as he rises from his seat to attend to the beeping oven and he’s quick to say, “I do believe Alec may be easier.” The sweet wine touches my lips and the taste is delicious, but I can’t think of anything other than this man on top of me, making me scream as he thrusts inside of me repeatedly.“I think you’ve maybe thought a little too far ahead, Mr.- Alec,” I’m quick to correct myself.  I watch as he works in the oven, turning the chicken breasts and then setting the tongs back down on the counter before coming back to his seat.
“Mmm, that could be,” he says picking up his glass, but not sitting.  I cross my ankles and turn in my seat to face him.“This isn’t very professional,” I tell him with a serious look, or at least the most serious I can manage.  He shrugs his shoulders and then takes a sip from his glass.“Do you want it to be?” he asks and then adds, “That’s fine if you do.  I understand the attraction may only be on my end.” My heart thumps hard in my chest.  I don’t think this man knows how to be subtle.  He’s honest and to the point.  But I admire that. “It’s definitely not just one-sided,” I admit, and then bite my tongue.  I’m thinking I should add that this is dangerous for me.  I could lose my job.  More than that though, this man could crush me.  I’ve never had a one-night stand because I know I don’t really do casual.  I’ve been wined and dined and then thrown away before.  It hurts too much.I don’t recover easily, and I prefer to avoid relationships.  But it’s been so long since I’ve been touched.
Alec’s deep voice rumbles, “That’s good to know.”  I don’t think a man has ever looked at me with the same level of desire.  It’s tempting and frightening all the same.“So, tomorrow?” he asks me, and my brow furrows with confusion. “Tomorrow?” I repeat.He smiles at me, and the smell of his cologne, or maybe his natural scent hits me with a powerful force that makes me lean in closer to him.“Would you like to go out with me tomorrow?” he asks. His gray eyes swirl with a mixture of desire and something else–a desperate need.  I nod my head slowly and say, “I’d love to.” 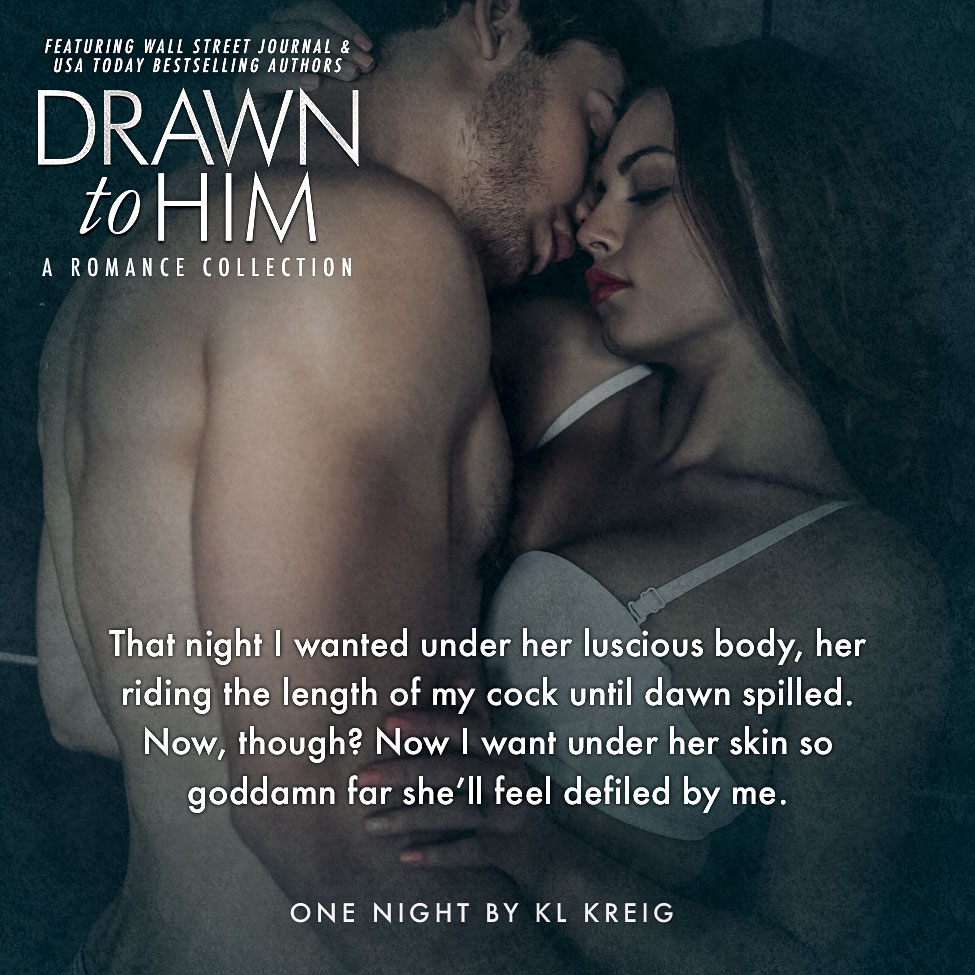 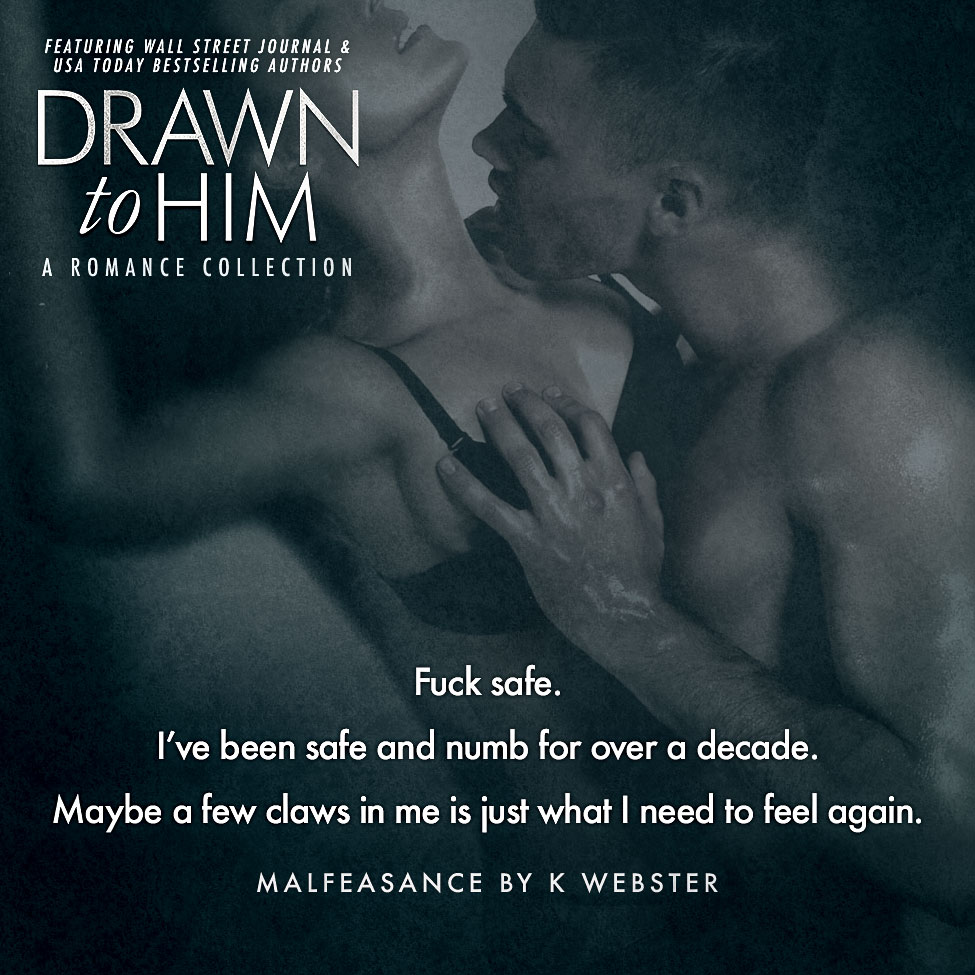 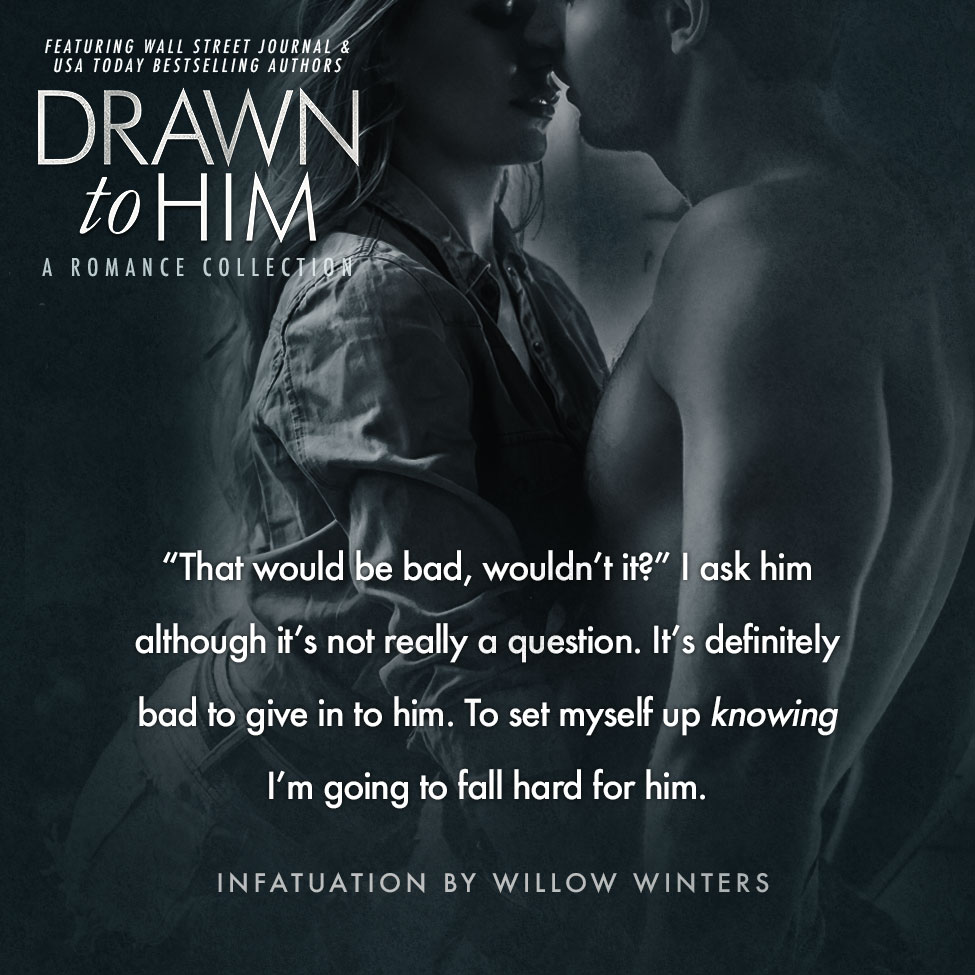 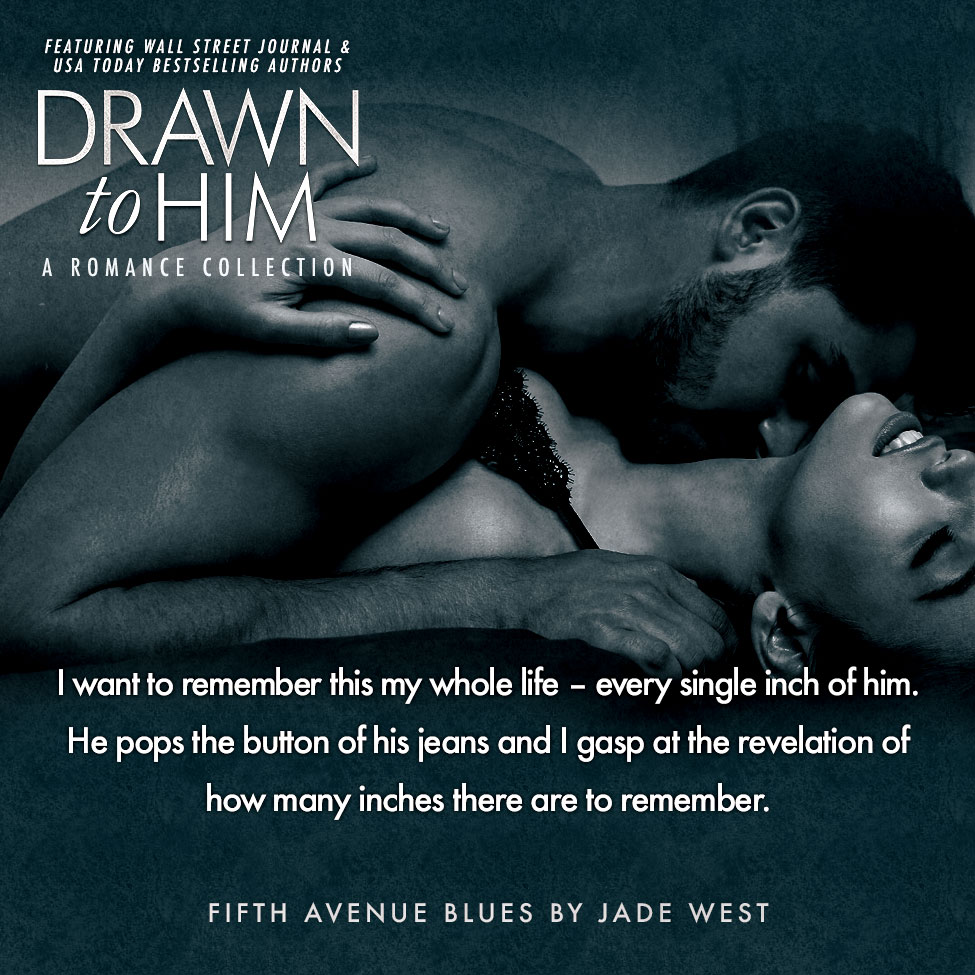 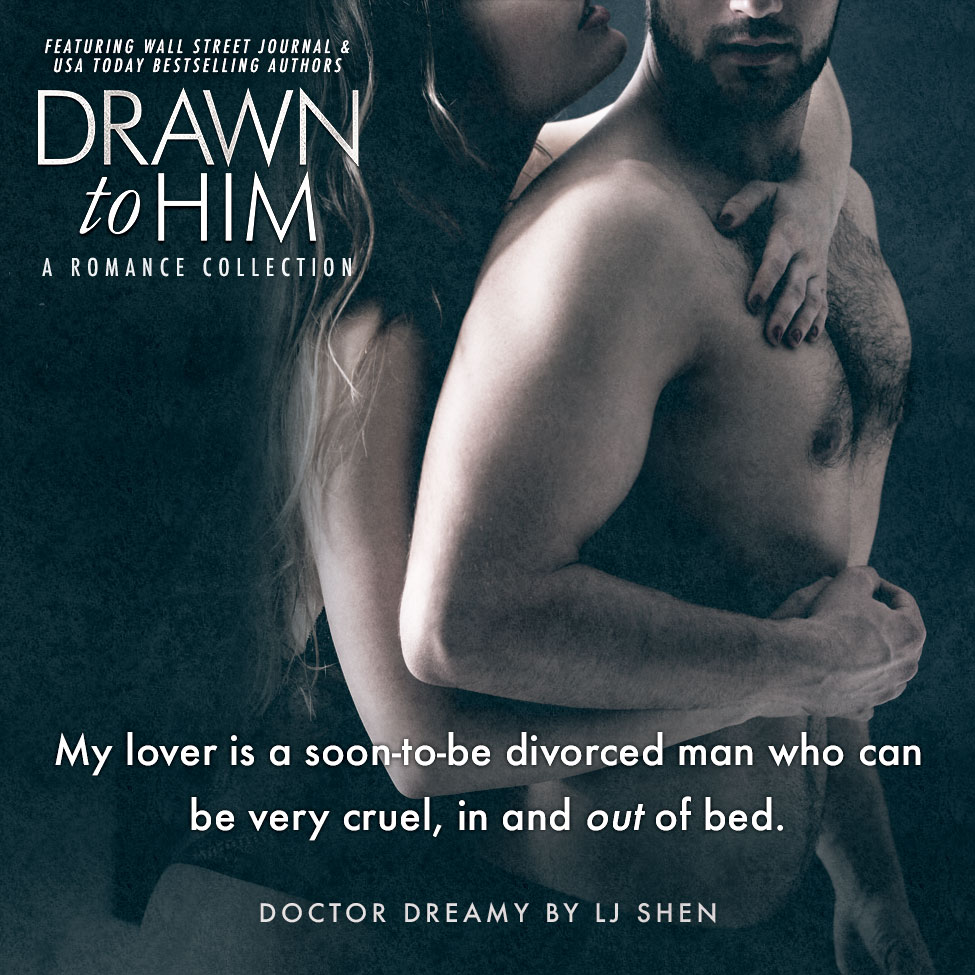 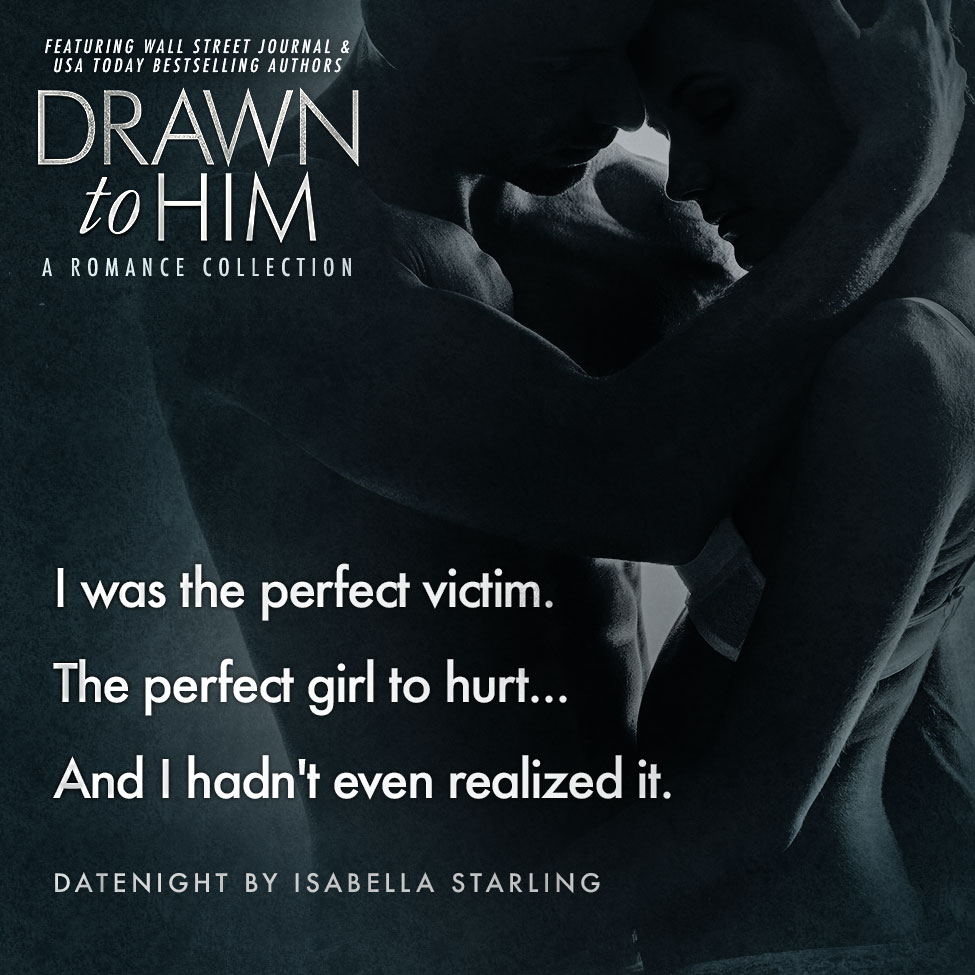 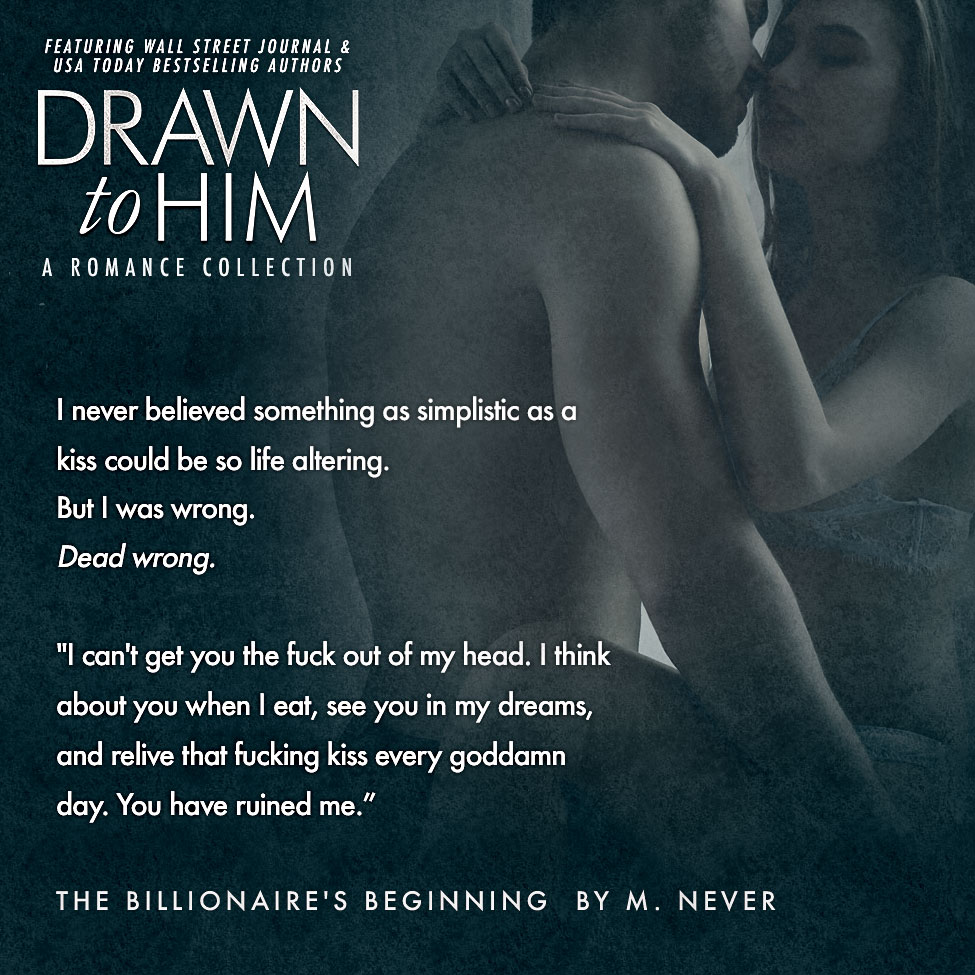 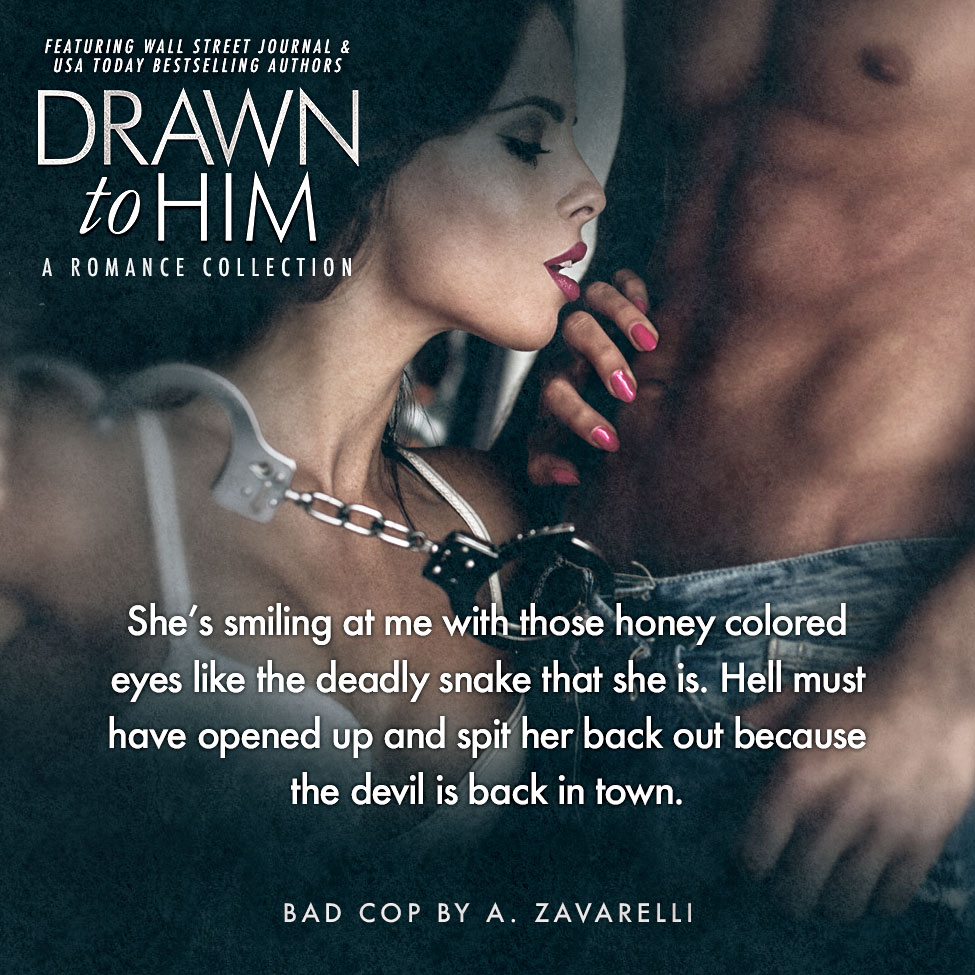 There are some men who make you helpless.

You know the kind. They steal the breath from your lungs and make your heart beat a little faster with a single look. You can’t stop staring, but the moment they pin those gorgeous eyes on you, you’re done for.

The kind that’s too hard to resist.

This is a collection of men just like that.

Handsome, confident and all for you.

DRAWN TO HIM is a collection of eight exclusive never-before-seen novellas you can’t resist, complete with HEAs. They have all the book feels and angst you’ve been wanting.

If you didn’t know this about me already, I am a HUGE fan of K. Webster. I was really lucky to win an arc of this anthology filled with some incredibly steamy novellas with guaranteed HEA’s! First off I want to give a moment’s praise to the beautiful cover!! WELL DONE! Now, I had only intended to read K. Webster’s story but then I saw the next one was by Jade West and her books have been blowing up my GR feeds for quite a while so I decided to read hers as well. I now understand why she has such a huge following!! I want to preface my reviews by stating these stories are for pure enjoyment. You aren’t going to read any Pulitzer prize winning material here but oh boy will these get your temperatures rising. You’re about to meet some sinfully seductive alphas who seem to have insatiable sexual appetites and excel in the art of dirty talk!!

Malfeasance was an off the charts steamy May/December romance. The Hero is about thirty-one years older than the Heroine and yet the age difference was not in the least bit off putting. There was definitely a case of “insta-love” but let’s be honest, it’s the sexy times the couple has throughout this story that made it quite enjoyable.

Max is a fifty-two-year-old Judge, who has been a widower for several years. He’s remained celibate since his wife’s death. Taking care of his teenage daughters had been his main focus and the thought of getting romantically involved with another woman never crossed his mind until the night he ends up at a sex club with one of his buddies and lays eyes on a beautiful blonde waitress. There’s something familiar about her but he can’t place it and then it all clicks into place. He remembers that haunted look in her eyes when he spotted her in the back of his courtroom almost a year ago when he announced the “not guilty” verdict of her sadistic ex-boyfriend. Max knew at the time that this man deserved to be sent behind bars for the rest of his life and that the jury had chosen unwisely but there was nothing he could do. When he happens to come across the young damsel in distress in the back of the club at the hands of the psychotic ex, he quickly jumps into action and rescues her.

Dorian has spent the last year trying to get her life back on track. She’s been unsuccessful at keeping her whereabouts hidden from her ex and is more than relieved when the handsome Judge comes to her rescue. Max ends up taking her to his buddy’s secluded cabin and while they spend the night there, they can feel an intense attraction igniting between them. Max battles with his conscience because of the huge age difference but Dorian is not in the least turned off by his age at all. Dorian thinks Max is one of the sexiest men she’s ever met.

Max ends up bringing Dorian to his place and helps her get a job as his intern. Things between the two heat up even more as they are practically spending every waking moment together. It doesn’t take very long before the two become physically intimate and once they give in to their desires it’s like the floodgates have opened and there isn’t a moment when they aren’t ripping off each other’s clothes and going at it.

The story had very little substance, but I did enjoy it a helluva lot!! There are very few times where I actually enjoy an “insta-love” romance but in this case, because I knew this was going to be a guilty pleasure read, I just allowed myself to appreciate the story for its pure entertainment value.

This was my first Jade West story. Oh, my!! This woman writes some of the filthiest smut I’ve ever read and damned if I didn’t enjoy it immensely. Kyle Prescott is a famous British actor who has major skills in the bedroom and one of the dirtiest sex talkers EVER!! Emily Foster is the shy and introverted Librarian who used to be classmates with Kyle back in High School. She had a huge crush on Kyle back then and they once shared a kiss at a party but she ran out on him thinking that he was drunk and would regret what happened once he sobered up. Emily had and still has very low self-esteem and couldn’t imagine someone like Kyle would ever have any interest in a girl who looked like her.

Now, years later, Kyle is back in town and he’s actually looking to spend some time with Emily. He has a shot at a big television series and needs her help running lines. Kyle is dyslexic and Emily was the only one who had successfully helped him in the past. When he asks her to help him again, Emily doesn’t hesitate to say yes and they soon wind up back in his hotel room. It only takes a matter of seconds before Kyle is unleashing his dirty talking skills on Emily and awakens a heated desire within her.

The sex is insanely dirty and H-O-T. Once they’ve had a taste of each other it seems neither of them can control their sexual appetites. A plethora of sex is to be had in this sexy, dirty, short story!! Oh, and there is one sugary sweet HEA as well!!

Another guilty pleasure read for this reviewer!!! I know I’ll be picking up another book by this author sometime soon!

DRAWN TO HIM is currently available! One Click it!!