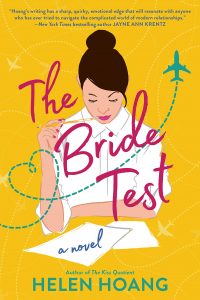 Khai Diep has no feelings. Well, he feels irritation when people move his things or contentment when ledgers balance down to the penny, but not big, important emotions — like grief. And love. He thinks he’s defective. His family knows better— that his autism means he just processes emotions differently. When he steadfastly avoids relationships, his mother takes matters into her own hands and returns to Vietnam to find him the perfect bride.

As a mixed-race girl living in the slums of Ho Chi Minh City, Esme Tran has always felt out of place. When the opportunity arises to come to America and meet a potential husband, she can’t turn it down, thinking this could be the break her family needs. Seducing Khai, however, doesn’t go as planned. Esme’s lessons in love seem to be working… but only on herself. She’s hopelessly smitten with a man who’s convinced he can never return her affection.

With Esme’s time in the United States dwindling, Khai is forced to understand he’s been wrong all along. And there’s more than one way to love.

He could give her everything she wanted, a green card, real diamonds, his body, but love? Stone hearts didn’t love.

She knew why he couldn’t love her. She could go to school, change her clothes, and change her speech, but she could never change where she’d come from.

I didn’t think I could love Khai & Esme’s story as much as Michael & Stella’s, but I did! I’m officially fangirling hard over Helen Hoang! This was a story that I easily was swept away by. I completely lost track of time and obligations. That is what made this a phenomenal read for me.

I don’t know why but I really love when the romance doesn’t come so easy for the main characters. When a character faces challenges that most people don’t, it makes the journey infinitely more interesting. Khai is Michael’s (from “The Kiss Quotient) cousin. He too, has Asperger’s as Stella did from book one, but I would say they aren’t on the same spectrum. Khai’s mother goes off to Vietnam to find her son a bride. She worries that he will be alone for the rest of his life unless she steps in to play cupid for him. She meets Esme, by chance, and is so impressed by her that she offers her an all expense paid trip to San Francisco, where she will spend a couple of months trying to get close to Khai, which will hopefully end up with a wedding.

While Khai and Esme may have come from two different worlds, they really do end up being true soulmates. Khai is set in his ways. Likes his routines. He doesn’t think he needs a woman. Khai doesn’t believe he has a heart, and this stems from tragic losses from his past. He’s internalized a lot of his pain and having Asperger’s, doesn’t make it easy for him to understand his feelings.

Esme comes from very impoverished conditions. She works as a hotel maid in Vietnam, to help support her family. Meeting Khai’s mother and being offered a trip to San Francisco was almost too good to be true to Esme, but she has an honest soul and marrying someone just to get a green card to be able to stay in the U.S., was not something she could ever go through with. Her plan was to find her American father, who left Vietnam before she was born and gain citizenship that way. But, when she sees Khai for the first time, there is no denying her heart was beating for him. Poor Esme battles with insecurities. She thinks being poor and not having a college education, make her an unsuitable match for Khai.

Their relationship starts off awkward but eventually strong attraction takes hold and Esme is falling hard for Khai, but he truly believes he is incapable of loving anyone else, and so the angst ensues.

I loved the relationship between Khai and his older brother Quan, who was always there for his brother. He took it upon himself to help Khai maneuver through some challenges that he was not equipped to handle on his own.

You can’t help but root for this couple to find a way to overcome their challenges and end up in a happily ever after that they truly deserved. I was so sad when I got to the end of the story because I wasn’t ready to say goodbye to these wonderful characters.

THE BRIDE TEST is currently available! I highly recommend it, and ”The Kiss Quotient”. 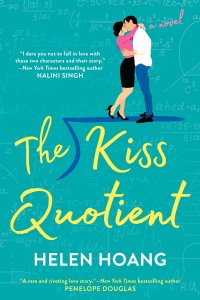 A heartwarming and refreshing debut novel that proves one thing: there’s not enough data in the world to predict what will make your heart tick.

Stella Lane thinks math is the only thing that unites the universe. She comes up with algorithms to predict customer purchases — a job that has given her more money than she knows what to do with, and way less experience in the dating department than the average thirty-year-old.

It doesn’t help that Stella has Asperger’s and French kissing reminds her of a shark getting its teeth cleaned by pilot fish. Her conclusion: she needs lots of practice — with a professional. Which is why she hires escort Michael Phan. The Vietnamese and Swedish stunner can’t afford to turn down Stella’s offer, and agrees to help her check off all the boxes on her lesson plan — from foreplay to more-than-missionary position…

Before long, Stella not only learns to appreciate his kisses, but to crave all the other things he’s making her feel. Soon, their no-nonsense partnership starts making a strange kind of sense. And the pattern that emerges will convince Stella that love is the best kind of logic…

Saying nothing, she let the moment wash over her, the uncertainty, the breathless hope, the anxiousness, and the shimmering contentment. The sight of their intertwined hands pleased her. So different, but still five fingers and five knuckles, the same general blueprint. She tightened her grip, and he squeezed her back. Palm to palm, two lonely halves found comfort in together. 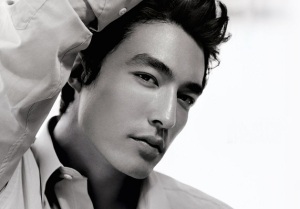 If I had taken the time to read the synopsis of this book, I would have gotten to this one so much sooner. I’ve read a few romances where the Hero has Asperger’s but this is the first book I’ve read that it’s the Heroine who has the disorder.

I loved EVERYTHING about this book! The plot and characters were superb! I am beyond thrilled that my last read of 2018 is this spectacular one. Sometimes when I see a ton of five-star reviews for a book by an author I’ve never heard of before, I get a bit skeptical but I can honestly confirm this book deserves ALL THE STARS!!!

Michael and Stella’s journey to love was beautiful and super steamy. The story flowed so perfectly. Never did I have the urge to gloss over anything. This book consumed me!

THE KISS QUOTIENT is currently available and if you haven’t read this one yet, get to it as soon as possible!!