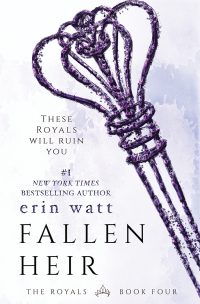 These Royals will ruin you.

Easton Royal has it all: looks, money, intelligence. His goal in life is to have as much fun as possible. He never thinks about the consequences because he doesn’t have to.

Until Hartley Wright appears, shaking up his easy life. She’s the one girl who’s said no, despite being attracted to him. Easton can’t figure her out and that makes her all the more irresistible.

Hartley doesn’t want him. She says he needs to grow up.

Rivals. Rules. Regrets. For the first time in Easton’s life, wearing a Royal crown isn’t enough. He’s about to learn that the higher you start, the harder you fall.

Easton Royal is an 18 yr. old senior at Astor Park Prep. He’s on the football team, popular, & insanely rich. He has it all. Looks, money, & brains. He’s all about having a good time. He’s known for being reckless, thoughtless, & making stupid, impulsive decisions, but is extremely loyal when it comes to family. His family is everything to him, but trouble seems to follow him & he often screws up. He lives life in the moment & doesn’t think much about consequences. He doesn’t really do girlfriends, & prefers hook-ups.

Easton meets a gorgeous girl a school named Hartley Wright. She’s a new student who catches him in a compromising position. She has him pegged right away as trouble & wants nothing to do with him. She makes it clear she isn’t interested & wants him to leave her alone, but Easton’s not one to back down from a challenge. He’s intrigued by Hartley & wants to know more about her. She’s the first girl that’s really held his interest, but the one girl he can’t have. He can tell she’s attracted to him but just can’t figure her out.

-“You want to see me without my shirt on. You know what? Let me give you a sneak peak. It’s awesome, by the way. You might want to close one eye to reduce the effect.”

Hartley is more of a loner. She thinks Easton is too much trouble & she doesn’t have time for that. He likes being the center of attention & she prefers being in the background. She just wants to get through her senior year & lay low. She thinks Easton is selfish & only does things that benefit himself. He’s arrogant & immature, but as she gets to know him better learns there’s more to him than what you see on the surface. Slowly he starts to grow on her, & they become closer.

Easton becomes a bit obsessed with Hartley, & cares about her. He wants her in his life any way he can have her, even if it’s just as friends. He offers her his friendship but wants more. Soon lines get blurred & their relationship gets complicated.

I’ve adored Easton from day one. The funny Royal with the huge heart. I was so happy to finally get his story. I can’t wait for his next book! Love these Royals!!!

One thought on “REVIEW – FALLEN HEIR (The Royals, #4) by Erin Watt”