The one guy she can’t have is the one she can’t forget.

Liam Quinn is one of the biggest movie stars in the world…and the only man Elissa Holt has ever truly loved.

After being out of her life for six years, he and his gorgeous fiancé are set to star in the new Broadway show Elissa is stage managing. The only trouble is, when late night rehearsals bring Elissa and Liam together, the line between what is and what could have been gets blurred. Now one moment of weakness is about to create a scandal that will echo around the world.

Elissa knows that falling for Liam again would be a tragedy in the making, but as any good romantic knows, love doesn’t always follow the script. 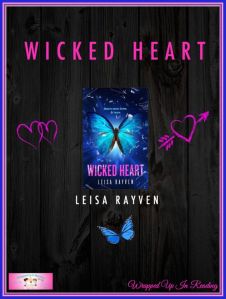 I don’t know where to even begin with my review on this book. I want to start off by saying that you can’t judge an author by only having read one book by them. I was one of the rare few that didn’t love BAD ROMEO. I actually kind of despised it. I decided that I wouldn’t bother to continue on with this series. A month ago, I received an email from the publisher, offering a Netgalley ARC of WICKED HEART. Not sure why I accepted it, but THANK GOD I DID!!!! This book was so addicting for me! It was seriously book crack!! I loved the story and I loved the characters. Most of all I fell pretty hard for Liam Quinn. He is nothing short of SPECTACULAR!! I am now wholeheartedly apologizing to Leisa Rayven for having doubted her writing ability and I am officially going to be fangirling over her when I meet her this summer!!

Lissa Holt is Ethan’s, from Bad Romeo, younger sister. She’s currently working as the Production Manager on the Broadway rendition of Shakespeare’s Taming of the Shrew. She’s about to come face to face with the man who obliterated her heart, Liam Quinn. He’s the male lead in the show and he’s the one guy she broke her ”no dating actors”rule for, six years ago. It has taken Lissa years to get over the heartache Liam caused but with just one look, all those feelings come rushing back. What’s worse is Liam’s co-star on the show, Angel Bell, is his fiancé and Lissa will be forced to witness their tender and loving gestures towards each other on a daily basis. When Liam finally crosses paths with Lissa, it is very apparent that she still has an effect on him and there is a tortured sadness in his eyes.

From there, we are brought back six years in the past, where these two first met. I loved the transition to the past because in this one we follow it all the way through. The author doesn’t alternate every chapter between the past and present. We get a few chapters in the beginning that are in the present and then we are transported back to the past and we don’t come back to present day until the whole story from how these two met and fell in love and then lost that love is totally explained to us. I LOVED how Lissa and Liam first met and how that first date ended made me weak in the knees. It’s just how I’d fantasize about meeting that once in a lifetime true love. I felt the butterflies in my stomach the entire time.

At the time that the two met, Liam was a construction worker and Lissa was a production manager on the set of the Broadway rendition of Romeo and Juliet. After their beautiful night together, Lissa refused to give her number to Liam. The girl was seriously NUTS!!! But she did mention that there were open auditions for the part of Romeo and Liam decides to give it a try. So this is how the two meet up again. Unfortunately, he gets the part and Lissa has a very strict rule about not dating anyone that she works with. For two months they have to endure the torture of seeing each other every day but not being able to be with each other. Let me just say I was in agony along with the two of them and HOLY HELL, on the night that the show is finally over when these two finally get together again, my freaking panties nearly disintegrated!!!! The sex is seriously EXPLOSIVE!! I was panting and just relieved that they were finally together, but it was bittersweet because Liam was off for Hollywood the next day. My heart hurt so much for the two of them.

I loved that there were some refreshing surprises in this one. Like I had expected to really despise Angel, but she ends up being a real sweetheart and it’s literally impossible to dislike this character. The angst was just on the verge of unbearable but it was oh so good!!! Even though I predicted what the true story was behind all the angst, it never did take away from my pure enjoyment of this book. Liam Quinn had my heart from the beginning and by the end I decided he is so worthy of being added to my top ten book boyfriends of all time list.

WICKED HEART is due out on May 16th. Don’t let this one slip through your fingertips. Get that one-click trigger finger ready ladies!! Liam is waiting for you!!! Even though this is book three in the series, it can be read as a standalone. So see, you have nothing standing in your way.