How can someone so smokin’ hot be so bad in bed? I mean, Sean Cassidy is absolute rubbish. RUBBISH. He is the epitome of walking, talking false advertising and I want a refund! Plus he’s an arsehole. So… what is wrong with me that I can’t stop thinking about him?

The Pixie and the Player is a full-length, romantic comedy novel, can be read as a standalone, and is the second book in the Rugby Series.

THE PIXIE
Lucy Fitzpatrick doesn’t like rugby.
As the little sister of Ireland’s most infamous rugby player, Lucy can’t seem to escape the championship-sized shadow cast by her big brother, or her mother’s frequent attempts to micromanage her future. Her rainbow hair is as free-spirited as her quest for inner peace, yet overbearing expectations keep bringing her down. And when she’s down, her compulsive little problem lands her in seriously big trouble.

THE PLAYER
Sean Cassidy is a cold-hearted brute… or so he’s been told. Frequently. By everyone.
His blonde locks, baby blues, and rock hard bod make ladies the world over drool with desire. As the rugby world’s second most infamous player, he should be basking in his success. But Sean has never been content settling for second place, and his frequent confrontations with Lucy’s big brother leave him cold. And when he’s cold, his compulsive little problem lands him in the lap of Lucy Fitzpatrick.

THE PLAN
Sean has a problem only Lucy can solve. Lucy has a problem only Sean can fix. The solution seems obvious: you scratch my back, and I’ll bail you out of jail. But when their business arrangement unexpectedly leaves Sean scorching hot and Lucy on the precipice of inner peace, can they convince the world—and Lucy’s big brother in particular—that this is the real deal?

Either way, both the Player and the Pixie are about to teach each other some pretty monumental lessons about family, life, but most importantly, love.

I couldn’t have possibly enjoyed this book more, even if I tried. Reading this story was the equivalent of book heaven for me. It was as good as if I had been on the beaches of Bora-Bora, drinking pink champagne and strawberries, while Brad Pitt (Legends of The Falls, version) was feeding me Nutella, YES! THAT GOOD!!!!

Lucy Fitzpatrick is the sister of Ronan Fitzpatrick, Rugby superstar. She’s recently moved to New York to embark on a new career as a celebrity blogger. Lucy has always lived under the scrutiny of her mother, causing her anxiety and forcing her to find unhealthy coping mechanisms. Now that she’s far away from her mom, Lucy is looking for a clean slate, a new beginning into a life where she is free to live her life as she pleases.

Sean Cassidy is the black sheep of the Rugby team, he’s a very talented player but his over the top negative personality has caused the dislike of all the team members and especially Lucy’s brother, Ronan. Sean is gorgeous and he knows it. But his insensitive ways usually push away anybody who tries to get closer. So he lives a very lonely life, and he is okay with that until he meets the girl with the bright smile and rainbow colored hair.

Lucy is feeling very conflicted because her attraction toward her brother’s nemesis is very intense. As it turns out the gorgeous and confident mountain of a man that is Sean Cassidy, is totally clueless about how to please a woman in bed.

Lucy can hardly believe that a guy who can kiss so good and passionately could be so bad in bed. Sean always knew he was bad at sex and romance, but the truth is that nobody ever stuck around long enough to give him a chance or a lesson. He is used to people only using him for their own benefit, but now for the first time in his life, he’s met a girl who he feels desperate to please.

The beauty of this book centered in how flawed and real both of these characters were. The lesson, no matter who you are or what you look like, we all want love and acceptance. The Player and The Pixie is a story where the talent of each author is showcased and together as a team their writing style is completely unique and wonderful. You can’t tell when one’s words begin and the other one ends. Together L.H Cosway and Penny Reid are dynamite, and they have set out to set your heart on fire with this highly entertaining story.

We’d been in each other’s orbit for a week, so why did it feel like the end of something vital? Why did my bones ache at the thought of not being able to speak with her, touch her, or see her? Why did I become absurdly furious whenever I thought of her with someone else?

I LOVED EVERYTHING ABOUT THIS STORY!!! 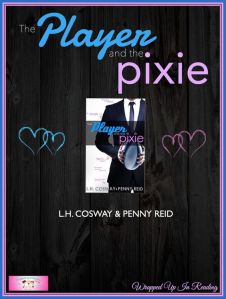 I’ve been having some really good luck lately with the books I’ve read. I can’t even begin to express just how much I loved this one right here!! I stayed up till the wee hours of the morning to finish it. THANK GOD FOR WEEKENDS!! I hope that the writing collaboration between L.H. Cosway and Penny Reid goes on for an eternity. These two are a perfect combination. This series is TOP NOTCH!!

I’m in love with Sean Cassidy!! I was crazy about Ronan Fitzpatrick but sorry to say, Sean has claimed my affections. He was undeservedly given a bad rep in The Hooker and the Hermit. Sean was abandoned by his mother at an early age. His aunt and uncle took him in, and he was often reminded of how he came from bad stock and was only appreciated for his athletic abilities. Sean may play the part of the bad ass player, but inside the man, beats the heart of a very insecure person in desperate need of some love and kindness. Sean also has a problem that will seriously shock you when you find out but it also makes him that more lovable as well. He’s never faced a challenge when it comes to the opposite sex until he crosses paths with the spunky and colorful pixie, Lucy Fitzpatrick. Lucy is Ronan Fitzpatrick’s little sister and Ronan happens to be the arch-nemesis of Sean.

Lucy has been living in New York City and working on the blog that her soon to be sister-in-law created. She’s been thriving in her new life in the big apple. Lucy has a little issue with shoplifting that she only seems to have the compulsion for whenever she interacts with her mother. They have a very toxic relationship. The relationship that a woman has with her mother really has a deep and lasting effect on her. I completely related to Lucy and understood her need to separate herself from that situation. While she is back in Ireland for a family visit, she gets that “need” to steal a little trinket from a drug store. Unfortunately to her utter dismay, she is caught in the act by none other than Sean Cassidy. He’s intrigued by her odd compulsion and blackmails her into going out to dinner with him. And so this is where the white-hot chemistry is sparked. Lucy knows Sean has to be off limits because it would be considered an act of betrayal by her older brother. As they spend time together Lucy will realize she’s got one huge dilemma on her hands.

Somehow, a few weeks later they end up running into each other at a yoga retreat in the mountains. I couldn’t wait for Sean and Lucy to get naked and sweaty!! When it finally happens, get ready for the unexpected!! I will say that it was a shocker but also refreshing. Once things start to really heat up, I couldn’t get enough of the schmexy. My tongue was seriously wagging!! Lucy and Sean both agree to keep things strictly physical, but as they spend more time together in and out of the bedroom, it becomes clear that they might be falling for the person they each are on the inside. They’re also huge dog lovers. That connection seemed to further strengthen the bond between them and proved that there was a tenderness inside of Sean.

I had a smile on my face the whole time I was reading this book and felt it was perfect in every way. For those of you who haven’t read this one yet, I highly recommend it. Even though this could be read as a standalone, I think to fully appreciate this story, you need to read book one first.

Lucy Fitzpatrick is a free spirited 23 yr. old woman from Ireland. She moved to New York about six months ago to start her new job as a celebrity photographer/blogger. She is the sister of a wealthy famous rugby star. She adores her big brother Ronan, & often attends his various rugby functions. At one of his team get togethers, Lucy crosses paths with one of Ronan’s teammates named Sean Cassidy. Sean is Ronan’s rival. He’s arrogant and is known for his bad attitude, but his body is absolutely drool worthy, & women everywhere want a piece of him. Lucy can’t help feel a bit flustered herself when in his presence. He’s big, blonde, & gorgeous, and has the most amazing ass she’s ever seen! She knows he’s off limits, but still can’t help fantasizing about him.

Lucy is often stressed by her controlling mother & seeks relaxation & inner peace. She attends yoga retreats & likes to express herself through her appearance. When she can’t meet the expectations of her mother, & feels lacking, she often gives in to destructive compulsions. One evening when she’s at an all time low, she runs into Sean Cassidy, the last person she wants to witness her at her worst. Sean is intrigued with Lucy & wants to get to know her. He hasn’t been able to stop thinking about her, & realizes they both have something to offer one another, & he suggests an arrangement of sorts.

What starts out as a game soon becomes all too real, & they have to decide if they want to part ways, or become more. Sean has never been with a woman he truly wanted & Lucy has never had feelings this strong for a man. She see’s a kinder gentle side of Sean that melts her heart. I loved this book & this man so much! Reid & Cosway together are pure gold! One of the best books I’ve read this year! It was fun & sexy & just perfection!!! Everything I love in a book! Can’t wait for Bryan & Eilish’s book up next! 😀

-I couldn’t help thinking about the next time I would get my fix. Lucy Fitzpatrick was my drug of choice, and has quickly become a necessity. I had no desire to contemplate rehab.